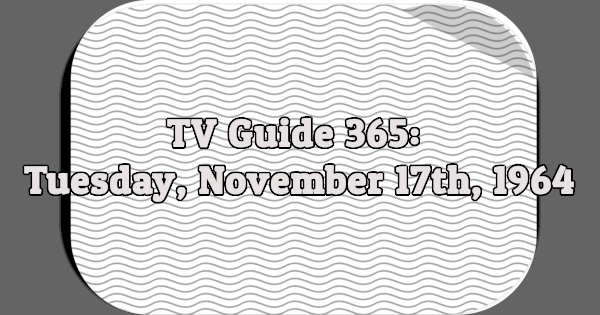 COMBAT! (ABC)
“Fly Away Home.” To the men’s way of thinking, this mission is strictly for the birds: providing escort behind enemy lines for a Signal Corps sergeant and his pigeons. Script by Kay Lenard and Jess Carneol. (60 min.)

8:00 WORLD WAR I (CBS)
“Battle of Jutland.” Maps and film clips cover the strategy, fighting and personalities of the Battle of Jutland, the only great naval clash of the war, and the battle that crippled Germany as a naval power. Robert Ryan narrates.

MAN FROM U.N.C.L.E.–Drama (NBC)
“The Double Affair.” To infiltrate the U.N.C.L.E. headquarters, THRUSH agents kidnap Solo and substitute and exact look-alike. Both roles are portrayed by Robert Vaughn. (60 min.)

McHALE’S NAVY–Comedy (ABC)
Binghamton drops court-martial proceedings against Parker and gets him promoted to lieutenant–after McHale’s gang has tricked him into thinking that Parker’s uncle is head of the Senate Naval Affairs Committee.

THAT WAS THE WEEK THAT WAS–Satire (NBC)

“A Golden Prison” for one of the world’s greatest art collections, the Louvre is a monumental work of art itself. Once the winter palace of the French royal family, its structure is a visual chronicle of French history since the late 12th century. Charles Boyer narrates this tour, which marks the first time American TV cameras were permitted access to the museum.

FUGITIVE (ABC)
“Escape into Black.” An explosion sends an unconscious Kimble to the hospital, and when he awakens he’s suffering from a very dangerous complication: amnesia. (60 min.)