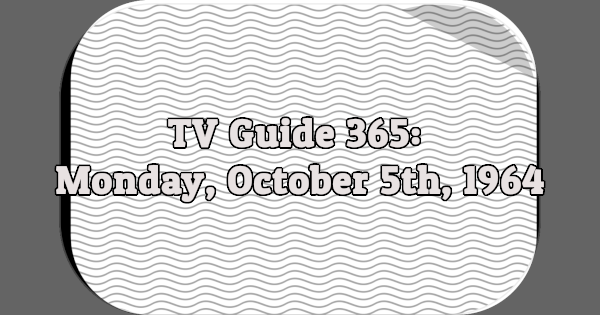 VOYAGE (ABC
“The Midst of Silence.” The Seaview arrives at an ocean rendezvous to pick up a Latin-American president, but the ship it meets is empty. (60 min.)

8:30 90 BRISTOL COURT (NBC)
[DEBUT] In “Harris Against the World.” Emmy-award winner Jack Klugman is Alan Harris, a big man with a Hollywood studio whose importance can be seen everywhere but in his paycheck.

ANDY GRIFFITH–Comedy (CBS)
Things get a little hectic around the Taylor household when Andy’s relatives pay a visit.

NO TIME FOR SERGEANTS–Comedy (ABC)
“Grandpa’s Airlift.” Will and some of his fellow recruits are quarantined on Grandpa Anderson’s farm when Ben develops what appears to be the measles. Will: Sammy Jackson. Grandpa Anderson: Andy Clyde. Ben: Kevin O’Neal.

9:00 LUCILLE BALL (CBS)
Lucy’s boyfriend is excessively athletic and Lucy isn’t, so she claims to excel in sports that just happen to be out of season.

WENDY AND ME–Comedy (ABC)
“Wendy’s Secret Wedding” for her airline stewardess friend Laura is so secret that not even the justice of the peace knows who’s to be married. George Burns is the landlord. Wendy: Connie Stevens. Jeff: Ron Harper. Laura: Erin O’Donnell.

9:30 MANY HAPPY RETURNS–Comedy (CBS)
After Walter gives his granddaughter the pup that a woman returned to the store, the lady’s husband storms in and demands the dog back. Walter: John McGiver. Joe: Mickey Manners. Laurie: Andrea Sacino.

10:00 ALFRED HITCHCOCK–Drama (NBC)
[RETURN] The “Return of Verge Likens” also marks the return of the series to NBC to begin its 10th season. Verge Likens, a poor country boy, seeks revenge on the political boss who shot down his father in a barroom brawl. (60 min.)

BEN CASEY (ABC)
“Autumn Without Red Leaves.” Artist Eric Morgan recovers from a mild stroke in every respect but one: He’s left colorblind. Casey takes Jane Hancock, his other patient, out on a dinner date. (60 min.)