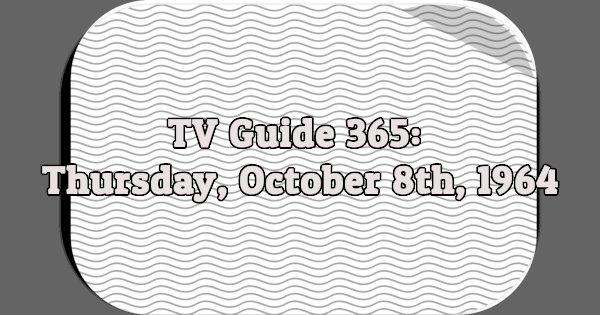 7:30 MUNSTERS–Comedy (CBS)
Insomniac Herman Munster goes for a relaxing stroll in the park–the same park police are searching for a purse snatcher.

DANIEL BOONE–Adventure (NBC)
“My Brother’s Keeper.” Yadkin insists that the Creeks who wounded him and killed an unarmed Cherokee were led by none other than Mingo. (60 min.)

8:00 PERRY MASON–Drama (CBS)
“The Case of the Scandalous Sculptor.” Scandal threatens the ultra-respectable publishing firm run by Everett Stanton and his brother-in-law claims the only way to avoid it is for Stanton to give him $10,000. (60 min.)

DONNA REED (ABC)
There’s some confusion as to “Who’s Who on 202” when Donna’s car breaks down on a road where police think an armed convict is hiding.

8:30 DR. KILDARE–Drama (NBC)
“The Hand That Hurts, the Hand That Heals.” Eight physicians and a psychiatrist have failed to diagnose Joan Cartwright’s illness, so she’s not very enthusiastic about letting Kildare have a try. Written by Edward J. Lakso. (60 min.)

MY THREE SONS–Comedy (ABC)
In the first of a two-part story, Bub uses his winnings from the Irish Sweepstakes to fly the whole family back to the auld sod. Filmed on location in Ireland.

9:30 HAZEL (NBC)
[COLOR] George’s law partner Harry Noll fears he is caught in “The Marriage Trap” after he impulsively proposed to George’s secretary during a party.

PEYTON PLACE (ABC)
Constance and Rossi go out on their first date, and Rodney tells Allison that he loves her.

10:00 DEFENDERS–Drama (CBS)
“Hero of the People,” by Rod Sylvester and William Woolfolk. Lonely, middle-aged Harry Obermayer has always been on the outside looking in, so when he finds the body of a despised narcotics peddler he decides to confess to the killing, and maybe become famous. (60 min.)

KRAFT SUSPENSE THEATRE–Drama (NBC)
[COLOR] “Operation Greif.” [Sic] An American Army sergeant, trying to get plasma back to his front-line outfit during the Battle of the Bulge, gives a life to four GIs. And any one of them might be a Nazi infiltrator. Script by Jerome D. Ross. (60 min.)