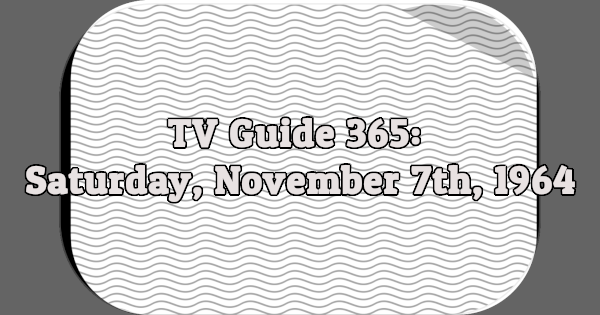 8:00 MR. MAGOO–Cartoons (NBC)
[COLOR] Magoo’s version of “Don Quixote.” The errant knight and his squire Sancho Panza set off to find something knightly to do.

8:30 GILLIGAN’S ISLAND (CBS)
Gilligan has grown quite fond of Burton, his pet duck. But Burton has attracted the carnivorous eye of some of the hungry castaways.

MOVIE (NBC)
[COLOR] Saturday Night at the Movies: “The Jaywalkers.” (1959) A former Mexican War hero escapes from prison after learning of his wife’s death. (Two hours)

10:00 GUNSMOKE–Western (CBS)
On the trail, Matt stops to fix the Carp family’s broken-down wagon. The Carps are so grateful that they offer him daughter Allie as a bride. (60 min.)