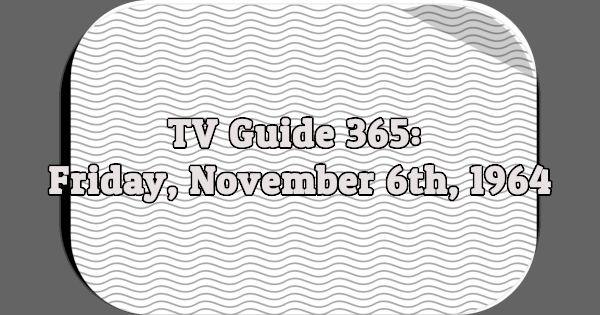 7:30 YOUNG PEOPLE’S CONCERT–Leonard Bernstein (CBS)
[SPECIAL] Leonard Bernstein begins his eighth season of “Young People’s Concerts” with a lesson in form. He shows his young audience the basic three-part “shape” of the sonata, and explains that it is the structure used for many kinds of music, even the Beatles’ songs–which he proves by singing part of “And I Love Her.” Taped at Lincoln Center’s Philharmonic Hall, The [sic] concert features the New York Philharmonic Orchestra. (60 min.)
“Rawhide” is pre-empted.

JONNY QUEST (ABC)
[COLOR] “The Robot Spy” is a creation of the devil Dr. Zin, and with it he hopes to obtain information about Dr. Quest’s new ray gun.

8:00 FARMER’S DAUGHTER–Comedy (ABC)
“Help–Not Wanted.” Katy hires her old friend Emily as housekeeper, not knowing that Emily’s goal is to trap Glen for herself.

BOB HOPE (NBC)
[COLOR] Anne Bancroft and Jack Warden in “Out on the Outskirts of Town,” by William Inge. ” For details, see the Close-up below. (60 min.)

ADDAMS FAMILY–Comedy (ABC)
Jealous Gomez wonders why Morticia is primping so for an expected visitor if he’s just the “childhood friend” she claims he is.

9:30 GOMER PYLE, USMC (CBS)
Sergeant Carter thinks he’s losing his touch: No matter how difficult he makes life for Gomer, the easygoing recruit seems to like him.

JACK BENNY–Comedy (NBC)
Jack’s guest is Abbe Lane, who sings “I Believe in You.” In a sketch, Jack plays a scientist in the jungle who’s trying to invent a non-slip banana peel. His wife (Abbe) becomes bored and casts her eye toward Lawrence of Africa (Dennis Day).

12 O’CLOCK HIGH–Drama (ABC)
“Decision.” The German radio announces that captured fliers are being imprisoned in what was their target area–just in case Savage intends to bomb it again. Script by Clair Huffaker and Jack Turley. (60 min.)