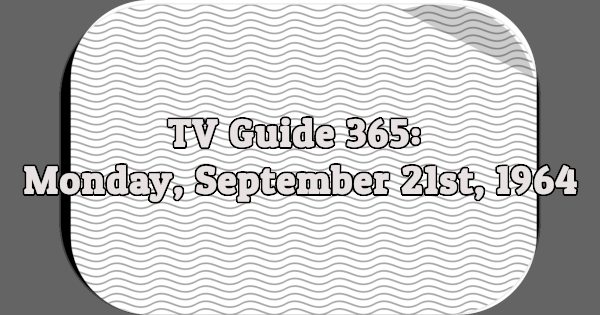 7:30 MOVIE (NBC)
[COLOR] Monday Night at the Movies: “The Wings of Eagles.” (1957) The career of Frank “Spig” Wead, a flying ace of World War I who later had a hand in developing naval air power. John Ford, a friend of Weads’, directed the film and is portrayed in it under the character name John Dodge. (Two hours)

TO TELL THE TRUTH (CBS)

VOYAGE
“The City Beneath the Sea” is discovered by the Seaview while searching for two missing research ships.

8:30 ANDY GRIFFITH–Comedy (CBS)
Andy begins his fifth season tonight in this new time spot. Opie has a crush on the smartest girl in his class–his teacher Helen.

9:00 LUCILLE BALL (CBS)
[RETURN] Lucy literally rolls into her new season: She buys a pair of roller skates that fit a bit too snugly.

HOLLYWOOD AND THE STARS–Documentary (NBC)
“How to Succeed as a Gangster.” The Prohibition era spawned gangsters, gamblers and hired killers who fascinated the public. Hundreds of gangster films were made on the strength of the hoodlum hoopla. Al Capone, John Dillinger and Two-gun Crowley were among the criminals portrayed by such stars as James Cagney, Paul Muni, Spencer Tracy, George Raft, John Garfield, Edward G. Robinson and William Powell.
This episode won a plaque at the Venice Film Festival as best documentary.

10:00 SING ALONG WITH MITCH–Songs (NBC)
[COLOR] The gang uses several notes of the scale to select the songs this evening. Included are “The Dipsy Doodle,” “Siboney,” “Pennsylvania Polka,” “Let’s Put Out the Lights,” “Red River Valley” and “Believe Me if All Those Endearing Young Charms.” (60 min.)
Last show of the series. “The Alfred” [Yes, TV Guide‘s listing cuts off in the middle of a sentence.]

BEN CASEY (ABC)
“A Bird in the Solitude Singing.” Surgery corrects the injuries Gloria Fowler suffered in an accident, but nothing affects her acid-tongued cynicism–born of a lifelong acquaintance with an unsightly facial birthmark. Coma patient Jane Hancock remains Casey’s other problem–and it’s not all medical, either. Script by John Meredyth Lucas.