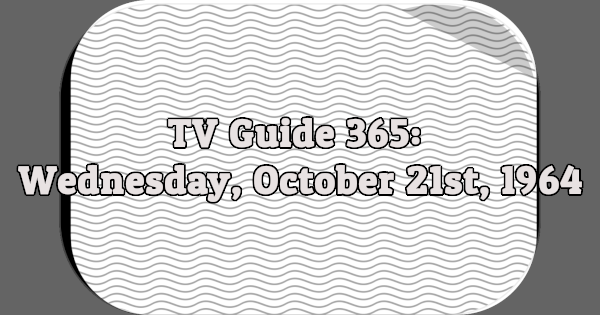 VIRGINIAN (NBC)
[COLOR] “The Brazos Kid” is an outlaw who’s supposed to be dead, but newspaperwoman Samantha Frye knows better–and she writes a series of articles about him that bring bounty hunters to Medicine Bow. (90 min.)

OZZIE AND HARRIET–Comedy (ABC)
Kris decides to join Rick in college so they’ll have more time together, but in this case “togetherness” becomes a nuisance.

8:00 PATTY DUKE (ABC)
Neither Patty nor Cathy can ignore “The Boy Next Door.” In fact, the competition between the two girls turns into all-out warfare.

8:30 BEVERLY HILLBILLIES (CBS)
Jed presents Greeley College with $1,000,000, and the school rewards him with an honorary doctorate. Granny’s incensed–she’s the one that does the doctorin’ in the family.

9:00 DICK VAN DYKE (CBS)
“The Man from Emperor.” Rob’s offered a job at a sophisticated girlie magazine, a prospect that he finds appealing and Laura considers appalling.

10:30 NEWS SPECIAL (ABC)
Palo Alto County, Iowa, has voted for the winning Presidential candidate in every election in this country. Howard K. Smith visits the county to talk with voters and political leaders.