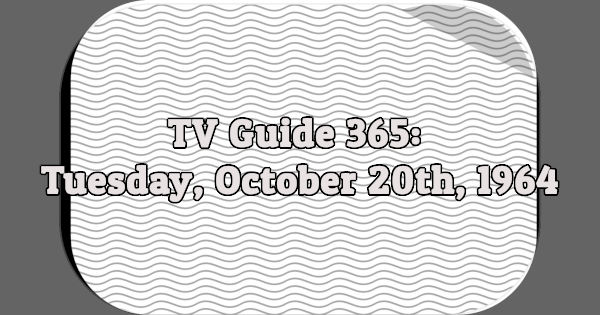 7:30 COMBAT! (ABC)
“The Hard Way Back.” Pvt. Larry Kogan has time to rescue Saunders from under a fallen beam before the Germans arrive, but the frightened soldier runs out on him instead–and tells Hanley that Saunders was killed. Script by Edward J. Lakso. (60 min.)

8:00 WORLD WAR I (CBS)
“They Sank the Lusitania” examines the causes and effects of Germany’s policy of unrestricted submarine warfare. Cameras view the Lusitania; the submarine that sank it; the reaction to the tragedy in the U.S. and England; and scenes shot aboard a German U-boat. Script by Burton Benjamin. Robert Ryan narrates. Music: Morton Gould.

MAN FROM U.N.C.L.E.–Drama (NBC)
“The Deadly Games Affair.” Both Solo and THRUSH agent Angelique are sent in search of a German scientist who until recently was presumed to be dead. Script by Dick Nelson. (60 min.)

McHALE’S NAVY–Comedy (ABC)
McHale is convinced that only drastic action will erase Captain Binghamton’s vengeful feelings toward Ensign Parker. All Parker did was plow into the Captain’s launch with PT 73.

THAT WAS THE WEEK THAT WAS–Satire (NBC)
[COLOR] Scheduled: David Frost, TW3’s British correspondent, reports on England’s general election’s [sic]; 1964 automobile are demolished. TW3-style javelins are hurled at the summer Olympics; and a “guest critic” casts a jaundiced eye at the new TV programs. (Live)

FUGITIVE (ABC)
“Tger [sic] Left, Tiger Right.” While Kimble’s working as a gardener for the wealthy Pryor family, he’s kidnaped [sic] by a pair who think he’s the head of the household. (60 min.)