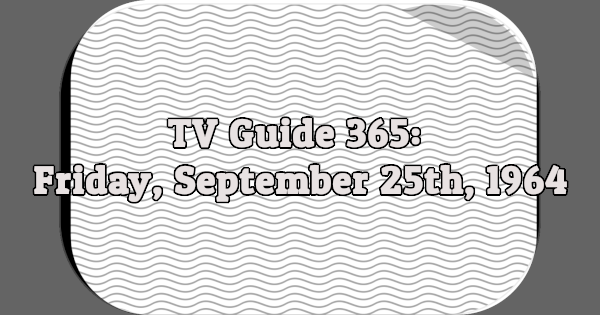 7:30 RAWHIDE–Western (CBS)
“The Race” starts this series off on its new season in its old Friday nighttime spot. After an argument with Favor, Rowdy quits his job and signs on as trail bos [sic] for another drive–which he hopes to get to market before Favor’s. (60 min.)

JONNY QUEST (ABC)
[COLOR] “Splashdown Antarctica.” Jonny and company head for Antarctica to trace a missile that went off course.

8:00 FARMER’S DAUGHTER–Comedy (ABC)
“The Mink Machine.” Glen isn’t too happy when a computer on a TV audience-participation show pairs Katy off with a handsome bachelor–and she’s promised a mink coat if she goes out with him every night for a week.

ADDAMS FAMILY–Comedy (ABC)
Gomez and Morticia rush Pugsley to a psychologist when he indicates he prefers baseball to playing with his pet octopus. They are certain they’ve failed as parents.

9:30 GOMER PYLE, USMC (CBS)
[DEBUT] In this half-hour comedy series, Jim Nabors stars as the character he portrayed on “The Andy Griffith” series–naive, easygoing Gomer Pyle. Only now Gomer is a recruit in the Marine Corps. Frank Sutton is seen as Sergeant Carter, a tough drill instructor continually plagued by the harebrained Gomer. In tonight’s episode, it’s Gomer vs. the obstacle course. Duke: Ronnie Schell.
“Andy Griffith” producer Aaron Ruben is creator of this series; he also wrote tonight’s episode.

JACK BENNY–Comedy (NBC)
To begin his 15th year, Jack (still 39) returns to the network where he began on radio 32 years ago. Tonight: Jack visits his new bosses, the NBC vice presidents; sits in on a “panel show” with the Marquis Chimps; and is visited by singer Dennis Day, who brings along his wife Peggy. Don Wilson is the announcer.

12 O’CLOCK HIGH–Drama (ABC)
“Follow the Leader.” To improve bombing effectiveness, General Savages tries a new technique: the whole group is to depend on the accuracy of the bombardier in the lead plane. (60 min.)

10:00 REPORTER–Drama (CBS)
[DEBUT] Novelist-playwright Jerome Weidman is the creator of this series about New York reporter Danny Taylor (Harry Guardino) who works on open assignment under city editor Lou Sheldon (Gary Merrill). Weidman describes his character: “Danny Taylor cares about people. He is not a man standing about with a notebook and jotting down facts. He is a man standing up to his armpits in the facts.” Standing by to whisk Danny to the action is driver Artie Burns (George O’Hanlon), and standing behind the newsman’s favorite bar is Ike Dawson (Remo Pisini). (60 min.)

JACK PAAR (NBC)
[COLOR] Musical-comedy star Mary martin and the comedy team of Mike Nichols and Elaine May are Jack’s guests on the first show of the new season. Jack shows films of his recent visit to Miss Martin’s ranch in Brazil, where she raises chickens and cattle. Mary will also appear in person to sing on the program. The Nichols-May comedy team, which made its TV debut on Jack’s “Tonight” show in 1957, makes the first of six scheduled appearances. (60 min.)