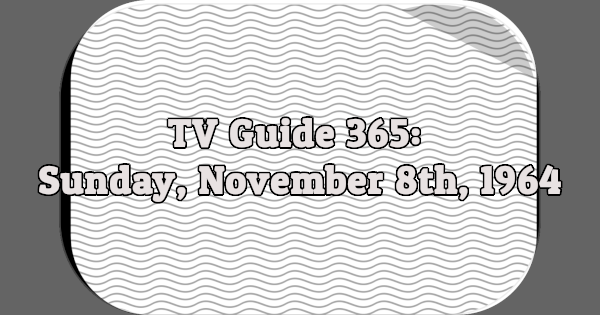 6:30 PROFILES IN COURAGE (NBC)
[DEBUT] “The Oscar W. Underwood Story,” the first drama in this series based on President Kennedy’s Pulitzer Prize book. For details, see the Close-up on page A-19. (60 min.)

Tonight: Arriving at the 1924 Democratic National Convention, Senator Underwood was a leading candidate for the Presidential nomination. But the Ku Klux Klan, a power in Democratic Party politics during the Twenties, controlled enough delegates to block the nomination.

7:00 LASSIE–Drama (CBS)
In the first episode of a two-part story, a mongrel dog abandoned by its owner tries to protect some sheep from a pack of wild dogs.

7:30 MY FAVORITE MARTIAN–Comedy (CBS)
Martin accompanies Tim to a local coffeehouse, where he plans to record folk music while Tim pursues Della, the owner of the place.

WAGON TRAIN (ABC)
“Those Who Stay Behind” are the people Hale hasn’t room for on the wagon train. Among them are ex-convict Ben Campbell, whose life has been threatened by his former partner in crime. (60 min.)

10:00 CANDID CAMERA (CBS)
“I’ve Got a Secret” panelist Betsy Palmer plays a woman dentist who shaves her patients; a “talent scout” harasses members of a high school band; a clerk casually mentions that the store is on fire; a joke becomes muddled while passing from one person to the next; people demonstrate styles of jumping rope. Durward Kirby and Allen Funt are the hosts.