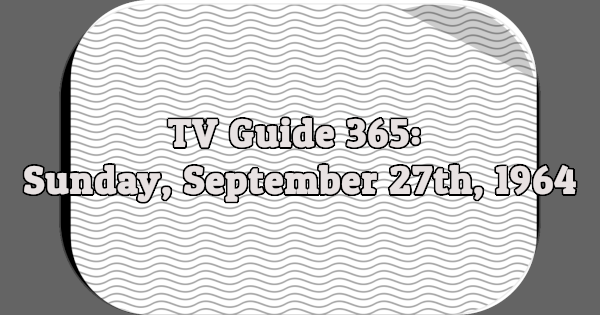 6:30 MISTER ED–Comedy (CBS)
In his first show of the new season, Carol warns Wilbur that shes going home to mother, so Ed offers to take on her duties around the house.

7:00 LASSIE–Drama (CBS)
Lassie tries to aid an eagle and her eaglets after the bird collides with Ranger Stuart’s airplane.

WAGON TRAIN (ABC)
“The Hide Hunters.” Copper and Barnaby set out to stalk buffalos [sic] with a group of hide hunters, one of whom delights in taunting young Barnaby.

9:00 MY LIVING DOLL (CBS)
[DEBUT] Julie Newmar makes like a girl robot in this half-hour comedy series produced by “Favorite Martian” man Jack Chertok. Bob Cummings (as psychiatrist Bob McDonald) is the caretaker of the transistorized lady. Other regulars: Jack Mullaney as physicist Peter Robinson, Doris Dowling as Bob’s sister Irene. Tonight: Dr. Carl Miller tells Bob that project AF 709 is missing from the space agency lab. AF 709 happens to be a girl robot, and “she” is walking about wearing only a sheet.

9:30 JOEY BISHOP–Comedy (CBS)
[RETURN] Switching to CBS and seen in a new time spot, Joey’s fourth season begins with his receiving word that the network has canceled his TV show. Jerry Lewis makes a cameo.

10:00 CANDID CAMERA (CBS)
On this first show of the new season, a carpenter is sold while standing in for a Roman statue in an art gallery; during a baseball telecast a ball shatters the screen; pin s move to avoid the ball at a rigged bowling alley; and a policeman does a “traffic cop ballet.” Allen Funt and Durward Kirby are the hosts.