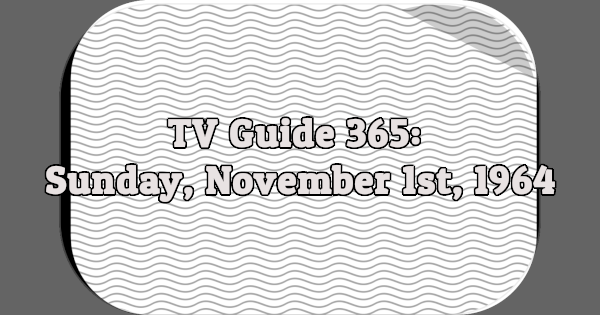 CAMPAIGN AND THE CANDIDATES (NBC)
[SPECIAL] Chet Huntley and David Brinkley are the anchor men for this pre-election evaluation of the campaign. Robert Goralski and Robert MacNeil report on the last-minute campaign activities of President Johnson and Senator Goldwater, and John Chancellor explains the functions of the computers NBC will use on election night. (Live; 60 min.)

7:30 MY FAVORITE MARTIAN (CBS)
Tim’s doing a series of articles on extrasensory perception, but Uncle Martin is no help at all: He warns Tim not to bring Prof. Hammershlag, an ESP expert, into their home.

WAGON TRAIN (ABC)
Coop finds himself becoming involved with a half-breed Indian girl he found wandering in the wilderness. (60 min.)

BONANZA (NBC)
[COLOR] “A Dime’s Worth of Glory” doesn’t appeal to Ben, who says no to dime novelist Tobias Finch’s request to write “The Saga of the Courageous Cartwrights.” Sheriff Reed Laramore, however, would love Finch to write about him. (60 min.)

MOVIE (ABC)
Sunday Night Movie: “The Road to Hong Kong” (English; 1961) brought back the famous “Road” trio of Hope, Crosby and Lamour after a decade-long hiatus. The plot involves a madcap chase from India to a Tibetan lamasery to Hong Kong, then halfway to the moon and back. (90 min.)

9:30 JOEY BISHOP–Comedy (CBS)
Because he wants his show to get good ratings, Joey goes all out to please Hilda–he thinks she has a rating device attached to her TV set.

10:00 CANDID CAMERA (CBS)
Singer Richard Hayes, portraying a modern Robin Hood, steals a watch and tries to give it to a stranger; women are questioned about their age and weight; a rumor is started on a New York beach that a lady is wearing a topless swim suit; a first-grader gives worldly advice to a kindergarten student; window washers are baffled by a moving spot of dirt; and signs instruct people to be careful of a glass door that isn’t there. Durward Kirby and Allen Funt are the hosts.