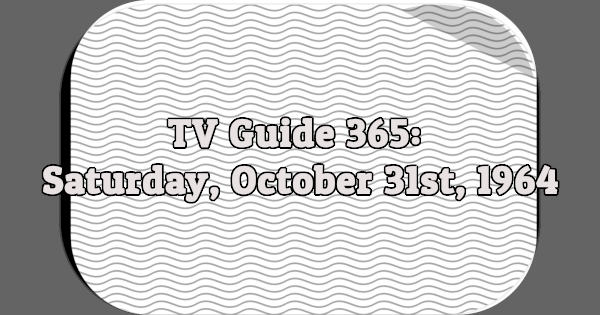 FLIPPER (NBC)
[COLOR] “Not Necessarily Gospel.” Andy Devine becomes a regular as old seaman Hap Gorman, who beguiles Bud with his tales of marine heroics–until lobster poachers put his claims to the test.

OUTER LIMITS (ABC)
“The Invisible Enemy.” The first astronauts on Mars report that there’s no sign of life. But something kills them, and another expedition is sent to find out what it was. Script by Jerry Sohl. (60 min.)

8:00 MR. MAGOO–Cartoons (NBC)
[COLOR] Magoo’s version of “The Three Musketeers” concludes with the musketeers sailing for England to retrieve the Queen’s jewels.

MOVIE (NBC)
[COLOR] Saturday Night at the Movies: “The Teahouse of the August Moon.” (1955) In 1944, an American captain is sent to rehabilitate an Okinawan village, but he succumbs to the oriental way of life instead Jack Patrick adapted the screenplay from his Broadway success. (Two hours, 30 min.)

10:00 GUNSMOKE–Western (CBS)
On the trail, Matt stops to fix the Carp family’s broken-down wagon. The Carps are so grateful that they offer him daughter Allie as a bride. (60 min.)