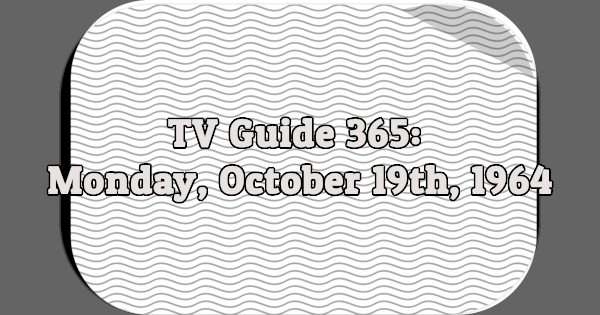 VOYAGE (ABC
“The Sky Is Falling.” The Seaview is sent to destroy a spaceship that has sunk in the Pacific Ocean. In this episode, regulars Richard Baseheart (Nelson) and David Hedison (Crane) also portray spacemen. (60 min.)

I’VE GOT A SECRET–Panel (CBS)

NO TIME FOR SERGEANTS–Comedy (ABC)
A surprise birthday party is being held for Grandpa Anderson, and Will manages to keep him out of the house while things are set up–but he can’t get Grandpa home again. Will: Sammy Jackson. Grandpa: Andy Clyde. Ben: Kevin O’Neal.

9:30 MANY HAPPY RETURNS–Comedy (CBS)
Wilma’s house is about to be razed to make way for a large project, but her cat Mitty is about to have kittens–so she and Burnley hold the house-wreckers at bay. Burnley: John McGiver. Wilma: Jesslyn Fax. Sharp: Russell Collins.

BING CROSBY (ABC)
“Flashback.” The Collinses indulge in a bit of nostalgia: They watch home movies of the days when Bing met Willie and Ellie. Bing sings “Can’t We Talk It Over?” and “Sweet Georgia Brown.” Ellie: Beverly Garland. Willie: Frank McHugh.

10:00 ALFRED HITCHCOCK–Drama (NBC)
“Water’s Edge.” Ex-convict Rusty Connors wants the loot from a payroll robbery his former cellmate masterminded, and the cellmate’s widow may be just the one to lead him to it. (60 min.)

BEN CASEY (ABC)
“For Jimmy, the Best of Everything.” Jimmy Reynolds is a young, ambitious doctor with a chip on his shoulder and an unusual patient on his hands: a close-mouthed victim of a flop-house brawl who has some perplexing symptoms. (60 min.)