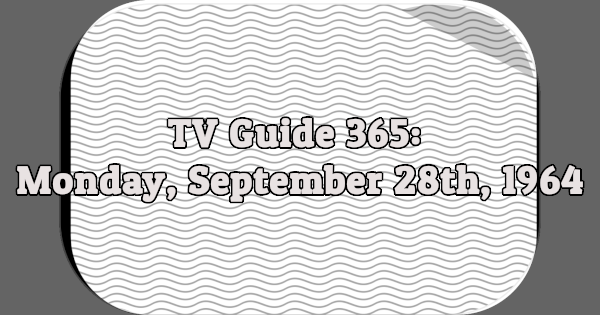 VOYAGE (ABC)
“The Fear-Makers.” The Seaview continues the secret underwater explorations that another sub was on when it mysteriously disappeared. (60 min.)

8:00 I’VE GOT A SECRET (CBS)
Songstress Connie Francis has a secret for the panelists. Steve Allen moderates.

8:30 ANDY GRIFFITH–Comedy (CBS)
On his fifth anniversary with the force, Barney receives some bad news: All sheriff’s deputies now have to meet certain physical requirements, and Barney falls short.

NO TIME FOR SERGEANTS–Comedy (ABC)
“Grandpa’s Airlift.” Will and some of his fellow recruits are quarantined on Grandpa Anderson’s farm when Ben develops what appears to be the measles. Will: Sammy Jackson. Grandpa Anderson: Andy Clyde. Ben: Kevin O’Neal. [Milly:] Laurie Sibbald. King: Harry Hickox.

9:00 LUCILLE BALL (CBS)
Talent scout Lucy gets Krause the butcher a spot on a TV show, hoping they’ll win enough money so she can afford to call the plumber. Bob Hope makes a cameo appearance.

HOLLYWOOD AND THE STARS–Kim Novak (NBC)
Cameras go “In Search of Kim Novak,” who lives in two diverse worlds: in Hollywood as a movie star, and as a recluse in a small stone castle near Monterey, Cal.
This last show was postponed.

BING CROSBY (ABC)
“A Bit of Fresh Danish.[“] The collins [sic] household has an unusual visitor. It’s Dr. Olga Dannebrog, an outspoken, free-thinking blonde whom Bing met at an international engineering convention in Copenhagen. Bing and Olga duet on “Annie Laurie” and “The Campbells Are Coming.”

10:00 OLYMPIC PREVIEW (NBC)
[SPECIAL] NBC set the scene for its coverage of the 1964 Tokyo Olympics, which oepn [sic] on Oct. 10. included [sic] are a brief history of the modern Games; films of past Olympic champions–and some of this year’s top entrants–in action; and a report on Japan’s preparations for this year’s Games. NBC’s Olympic reporters Bud Palmer, Jim Simpson, Bill Henry and Rafer Johnson (1960 decathlon champ), discuss new Olympic events, records that may fall in Tokyo, and the schedule of this year’s Games. (60 min.)

BEN CASEY (ABC)
“But Who Shall Beat the Drums?” After years of study, graduate student Paul Vrolic is determined to let nothing postpone his exams for a doctorate in English literature, not even a critical illness. Casey’s other patient, Jane Hancock, is jolted by the appearance of her father. Script by Norman Jacob.