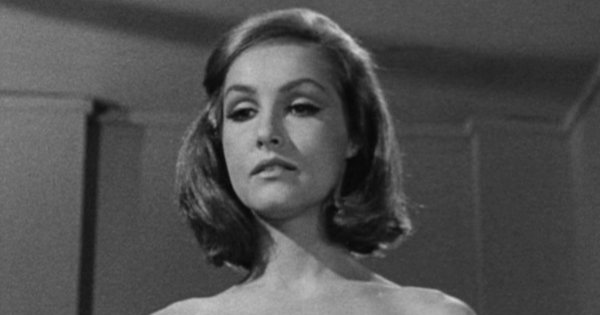 One season wonder My Living Doll celebrates its 55th anniversary today. The sitcom debuted September 27th, 1964 on CBS. Bob Cummings starred as Dr. Bob McDonald, who worked for a company called Space Research Center. In the series premiere, Bob learns about the existence of project AF 709: a beautiful, female robot and is asked to look after her for a few days. Julie Newmar played the robot, named Rhoda. Unfortunately for Bob, a few days turns into a few months when Rhoda’s creator is reassigned to Pakistan.

Jack Mullaney co-starred as Bob’s best friend Dr. Peter Robinson, who lived in the same apartment complex and instantly fell in love with Rhoda. The cast also included Doris Dowling as Bob’s sister Irene, who comes to live with Bob to act as a chaperone for Rhoda.

Critics were split in their reviews of My Living Doll but viewers weren’t. They didn’t tune in. In mid-December, CBS moved the show from Sunday night to Wednesday night. Less than a month later, Bob Cummings quit the show after filming 21 episodes. The final five episodes of the season saw Peter learn the truth about Rhoda and become her new guardian. Doris Dowling was written out of the series.

CBS cancelled My Living Doll after one season due to low ratings. In March 2012, MPI Home Video released 11 episodes of My Living Doll on DVD, all of which feature Bob Cummings. Where are the remaining 15 episodes? Missing and presumed lost, unfortunately.

Learn all about My Living Doll by reading my in-depth article about the show.

Do you remember watching My Living Doll on CBS during the 1964-1964 season? Were you surprised when Bob Cummings quit the show?

One Reply to “55th Anniversary of My Living Doll”