I haven’t watched every episode of all of the obscure TV shows I’ve written articles about. I’ve watched a handful of episodes of some shows but for many of them I’ve only been able to watch one episode. With few exceptions, I’m interested in watching more episodes of any obscure TV. Camp Runamuck is one of those exceptions. You can read my article about it here.

I’ve seen one episode of the 1965-1966 sitcom, which celebrates its 50th anniversary today. It premiered on Friday, September 17th, 1965 and somehow managed to last the entire season despite scathing reviews and horrible ratings (the average rating for the first two episodes placed Camp Runamuck 89th out of 96 programs on the networks). 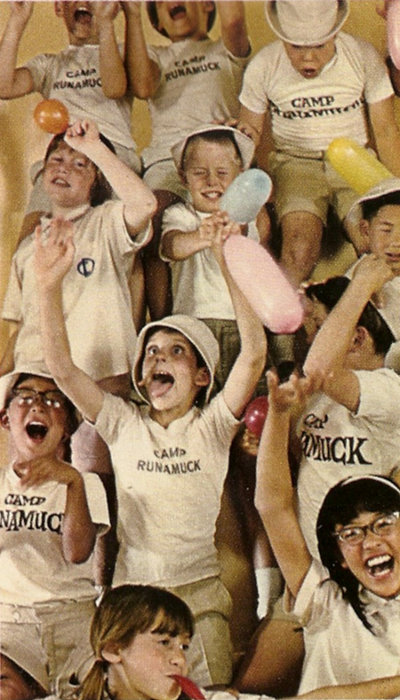 I think the problem is that Camp Runamuck only appealed to children unlike shows that could appeal to children and adults like Lost in Space, Flipper, The Munsters. TV Guide, in its Fall Preview summary of Camp Runamuck, suggested fathers watching with their kids would have only one thing to look forward to:

Fortunately, for male adults whose children may insist on watching this flapdoodle, there is a girls’ camp across the lake, one of whose counselors is Caprice Yeudleman (Nina Wayne). Caprice may not know how to put up a pup tent, but she can do wonders for a middy blouse.

(I must admit to not being familiar with the term “flapdoodle,” although I gather it isn’t a good thing, nor do I know what a middy blouse is.)

I have absolutely no interest in watching any additional episodes of Camp Runamuck, even for research purchases. It’s a painful show to watch as an adult. I think I know everything I need to know about it from viewing one episode, reading countless reviews, and studying plot summaries from newspaper listings.

For those of you who may have watched Camp Runamuck when it originally aired 50 years ago, I’d love to hear your thoughts. If you were young enough did you enjoy it?