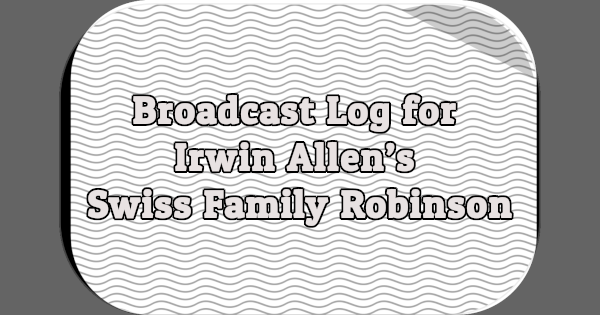 I don’t know exactly why but there is an awful lot of confusion about when specific episodes of Irwin Allen’s Swiss Family Robinson originally aired on ABC during the 1975-1976 season. Television Drama Programming: A Comprehensive Chronicle: 1975-1980 by Larry James Giankos lists airdates and titles for 19 episodes but TV Guide and television listings in a variety of newspapers indicate there were actually 20 episodes. Most online sources agree that there were 20 episodes.

All of the episode titles listed in Television Drama Programming match titles given in newspaper listings but some of the dates are wrong. A number of online sources also have titles and dates that conflict with TV Guide and newspaper listings.

Furthermore, although some online sources state that the two-hour pilot telefilm was repeated on Sunday, September 7th, 1975–which would have been the week before the series premiered–I can find no evidence that it did. It’s possible it was only seen in parts of the country due to a live football game that started at 9PM ET.

Finally, Television Drama Programming and some online sources contend that the Sunday, December 14th, 1975 episode (“Ernie’s Christmas”) was a two-hour special but listings in numerous newspapers confirm that it was a regular one-hour episode that aired from 7-8PM followed by The Six Million Dollar Man at 8PM and The ABC Sunday Night Movie (What Ever Happened to Aunt Alice?) at 9PM.

What follows is, I believe, an accurate list of Irwin Allen’s Swiss Family Robinson episodes: original broadcasts, repeats, and pre-emptions. However, I want to stress that TV Guide and newspaper television listings are not infallible and it is entirely possible that ABC decided to pre-empt certain episodes and air them later in the season, making printed sources inaccurate.

My article on Irwin Allen’s Swiss Family Robinson can be found here.

If you have any corrections or questions, please contact me or hit the comments.