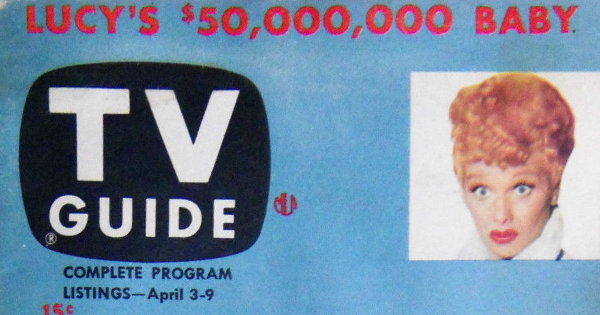 The first issue of the national TV Guide magazine was published 65 years ago today. The April 3rd, 1953 issue featured Desiderio Alberto Arnaz IV (better known as Desi Arnaz Jr.) on the cover. The new magazine launched with a circulation of 1.5 million in 10 cities. For the six months ending December 31st, 2017, TV Guide had a circulation of just 1.3 million (down from 1.8 million for the six months ending December 31st, 2014). At its peak, TV Guide reached close to 20 million readers every week.

Publisher Walter H. Annenberg, in the inaugural “As We See It” editorial printed on the inner front cover, laid out his vision for the magazine:

This is your new TV Guide.

Up to now, many magazines have been distributed throughout the United States, while others, devoted to material of local interest, have been circulated in limited areas only.

Television’s growing importance in our daily lives brought a need for accurate and complete station schedules printed in convenient form. In nearly every city served by television, this need was soon filled by weekly magazines which in essence were theater programs–programs for the millions of home theaters created by television.

Now, under the name TV Guide, these publications will become national as well as local. They will continue and, in fact, expand their local listing pages and their news columns. In addition, the new TV Guide offers readers throughout the Nation news, features, and columns by staffs of writers in the television capitals. As a national, as well as local magazine, TV Guide will make use of the most modern printing facilities, bringing readers four-color pages–as a prelude to the day when television itself will be in color.

What can you expect of the new TV Guide? Just this: your magazine is dedicated to serving constructively the television viewers of America. By serving the viewers, and increasing their enjoyment of the medium, we will be serving the entire television industry.

There were also reviews of NBC’s Robert Montgomery Presents and Time to Smile (an umbrella title for The Alan Young Show and The Ken Murray Show), a picture story on Walter Winchell, a profile on Herb Shriner, and more.

It’s so nice to have a GUIDE around the house!

It’s so convenient. A subscription to TV GUIDE means it’s always there when you want it. It means you’ll see all the best shows because you’ll know, days in advance, when and where they’ll be on. When TV GUIDE comes regularly, once a week, it means you get to know the television personalities, how TV works behind the scenes, what new shows are being planned, what new stars are rising. A subscription to TV GUIDE–the most complete, most interesting, most informative TV magazine–means you’ll get the utmost pleasure from your television set, every week and every day of the year.

It isn’t hard to have a GUIDE around the house. It’s really very easy. Use the coupon you’ll find inside to order your subscription, at the low subscription rates. Send it in today. Your subscription will start immediately.

It’s unknown how many copies of this first issue still exist. You can usually find a few copies on eBay, some with address. That suggests subscribers to the magazine’s precursors had the opportunity to subscribe to the new magazine. Is it possible someone who subscribed to the very first issue is still receiving TV Guide today?