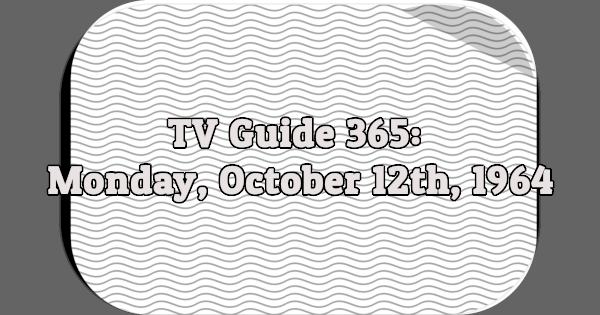 VOYAGE (ABC
“The Price of Doom.” In Antarctic waters for research, Nelson hears a mysterious signal that’s apparently coming from within the Seaview. He suspects that one of his three passengers is keeping someone posted on the sub’s position. (60 min.)

NO TIME FOR SERGEANTS–Comedy (ABC)
Will and fellow recruit Jack Langdon are hypnotized into thinking they’re high-ranking officers in World War II–and they take off in a plane with intentions of bombing Germany. Will: Sammy Jackson. King: Harry Hickox. Langdon: Michael McDonald. Major Richards: Alan Hewitt.

9:00 LUCILLE BALL (CBS)
Lucy’s old flame Vinnie Meyers pinch-hits for Mooney at the bank, and she tries to soft-soap him into giving her an advance on her allowance.

10:00 ALFRED HITCHCOCK–Drama (NBC)
“Change of Address.” Keith Hollins and wife move into a house by the sea–a house that he’s determined to live in even though it gives his wife the creeps. Written and produced by Morton Fine and David Friedkin. (60 min.)

SLATTERY’S PEOPLE (CBS)
“Question–What Ever Happened to Ezra?” Carsonville is a unique state institution for the aged that’s about to be shut down, but not if 86-year-old Ezra Tallicott has anything to say about it. He’s bicycling to the state capitol to get Slattery on his side. Slattery: Richard Crenna. B.J.: Maxine Stuart. Radcliff: Edward Asner. (60 min.)
Guest Cast
Ezra Tallicott …………… Ed Wynn
Dr. Robert Kelly …………………. Richard Kiley
Pat Allison …………………. Joan Blackman

BEN CASEY (ABC)
“You Fish or You Cut Bait.” Jane Hancock’s increasing influence on Casey and Dr. Rogers begins to create professional as well as personal problems for both of them. Script by Norman Katkov. (60 min.)

11:15 SUMMER OLYMPICS–Tokyo (NBC)
[SPECIAL] Scheduled: finals in the men’s 100-meter freestyle, women’s 200-meter and women’s springboard diving. This week’s coverage is listed in the Olympic Guide, page A-4.
For the next two weeks, Johnny Carson will be seen 11:30 P.M.- 1 A.M.