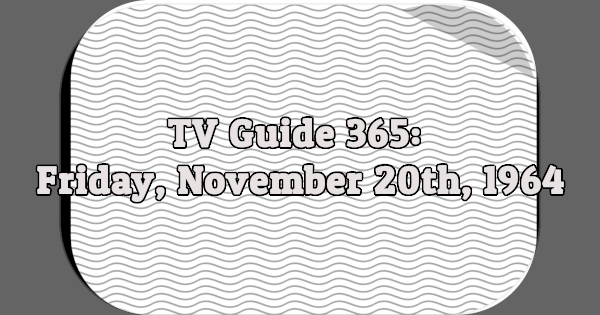 7:30 RAWHIDE–Western (CBS)
“Damon’s Road,” conclusion of a two-part comedy-drama. An enraged Gil Favor is behind bars and Damon has accomplished his task–getting the drovers to lay the track for his railroad. (60 min.)

JONNY QUEST (ABC)
[COLOR] “Shadow of the Condor.” On a trip to South America, the Quests’ plane develops engine trouble over the Andes.

ADDAMS FAMILY–Comedy (ABC)
After being scolded for playing with Uncle Fester’s dynamite caps instead of her own, Wednesday packs her pet spider and prepares to run away.

12 O’CLOCK HIGH–Drama (ABC)
“Appointment at Liege.” Maj. Gus Denver has a powerful reason for wanting to bomb Liege: His entire crew was killed on a mission over the city while he was back in the States. (60 min.)

JACK PAAR (NBC)
[COLOR] Guests are Ethel Merman, who sings and chats with Paar; the Muppets, hand puppets operated by James Henson; and the cast of Broadway’s satirical musical revue “Oh What a Lovely War,” who do numbers from the show. (60 min.)