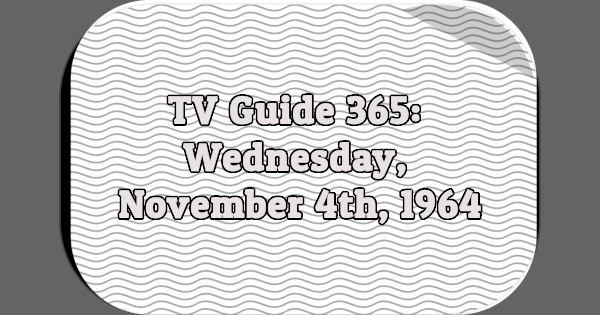 VIRGINIAN (NBC)
[COLOR] “A Father for Toby.” Young Toby Shea, a resident of Medicine Bow’s orphanage, “adopts” Trampas as a father. But Toby’s real dad isn’t dead–he’s just been released from prison and has set out to find his son. (90 min.)

OZZIE AND HARRIET–Comedy (ABC)
Kris offers to instruct the frat men in dance technique–they’ve rashly agreed to do a comic ballet for the women’s club benefit. In a dream sequence, Kris and Rick dance to music from Tchaikovsky’s “Swan Lake.”

8:00 PATTY DUKE (ABC)
“The Greatest Psychologist in the World.” Patty’s convinced that if she takes the right psychological tact, her parents can be persuaded to let her accept a Harvard man’s invitation to a prom.

SHINDIG (ABC)
Performing tonight are Gerry and the Pacemakers (“How Do You Do It?”); the Righteous Brothers (“Great Gettin’-up Morning”); Glen Campbell (“Summer, Winter, Spring, Fall”); Ketty Lester, the Blossoms and the Wellingtons (“You Can Have Him”); Gene Pitney (“I’m Gonna Be Strong”); and Smokey Robinson and the Miracles (“You Really Got a Hold on Me”). Jim O’Neill is the host.

9:00 DICK VAN DYKE (CBS)
“4 1/2,” first of two episodes about a show the gang is planning for men in the state penitentiary. Rob recalls how he and Laura met prison entertainment direct Lyle Delp–Lyle held them up in an elevator when Laura was pregnant.

9:30 CARA WILLIAMS (CBS)
Cara and Frank recall how they first met at a wedding rehearsal–they made things merry by helping to start a fight between the bride and groom. Directed by Gene Nelson. Frank: Frank Aletter. Burkhardt: Paul Reed. Mary: Jeanne Arnold.

BURKE’S LAW–Mystery (ABC)
A shotgun blast ends the life of wealthy Lenore Wingfield–the day before she was going to change her will. (60 min.)

10:00 DANNY KAYE–Variety (CBS)
Danny welcomes Lucille Ball and singer John Gary. Sketches: Danny and Lucy play a married couple dominated by their maid; and in “The Show Must Go On,” the two are stock-company actors who must do all the roles in the show because the rest of the players are late. Earl Brown singers. (60 min.)