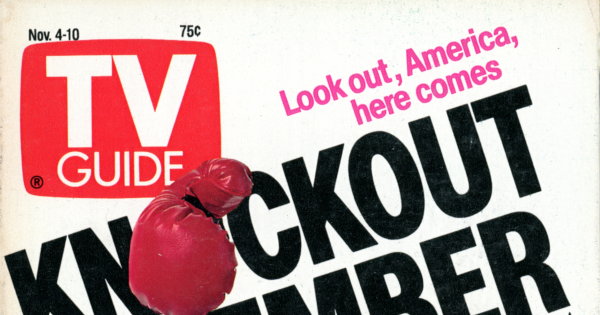 This issue is chock full of previews for November sweeps programming: made-for-TV movies, docudramas, special episodes, and more. In other words, there’s very little of interest to me. The cover article is a week by week breakdown of what to watch on the networks and cable. Then there’s an article spotlighting Jessica Hahn, Barry Bostwick, and Phyllis Diller–all of whom have projects airing during November sweeps. Valerie Bertinelli, star of the upcoming CBS made-for-TV movie Taken Away, gets a three-page article all to herself.

There’s also a short article about NBC’s two-part docudrama Cross of Fire, about a woman in love with a Ku Klux Klan leader in the 1920s. Finally, former Secretary of the Navy John Lehman shares his thoughts on how television covers the military. “Military power in a democracy requires vigilant oversight,” he declares. “Television should keep the public informed of the threats against which we must maintain a powerful military, of the state of readiness of our armed forces and of their evolving relationship to society. But TV fails to perform that function and even in muckraking often misses the important stories.”

I skipped the article about the Ku Klux Klan as well as Mr. Blackwell’s look at the best and worst soap opera fashions.

Prices from the Video Cassette Report for movies on VHS: The Carpenter ($89.95), The Navigator ($89.98), Nowhere to Run ($79.95), The Rachel Papers ($79.98), Say Anything ($89.98), Scenes from the Class Struggle in Beverly Hills ($89.95), Valentino Returns ($89.95). Cheers ‘n’ Jeers praises Anything but Love as “the season’s most improved series,” criticizes “overeffusive network sports announcers,” applauds Robert Davi’s work on Wiseguy, and laments the incompetence of policeman Rafe Garretson on One Life to Live.

Robert MacKenzie reviews ABC’s Doogie Howser, M.D. and is both disturbed and impressed. He calls it “a bad idea nicely executed” and praises Neil Patrick Harris and the rest of the cast. “But the notion of a 16-year-old kid wielding a scalpel is repulsive as well as preposterous, boy genius or no.” The show places too much emphasis on sex and it simply too unbelievable to enjoy.

There are seven news reports this week. The first explains why morality watchdog groups Morality and Media and CLeaR-TV are exited about local leased-access New York City hardcore-sex series Midnight Blue airing across the country. Unlike New York City, other parts of the country may charge publisher Al Goldstein with obscenity. The show survives in New York City because it doesn’t run afoul of local obscenity laws.

Other reports: a look at ratings for programs in first-run syndication; General Hospital‘s Jane Elliot will take five weeks of maternity leave to care for her newly-adopted daughter; Tony Danza’s behavior on the set of Who’s the Boss?; behind-the-scenes problems on Designing Women; a romance for Kojak; and whether the NCAA will restrict advertisements for beer.

Three of the seven letters respond to a report about CBS targeting older viewers published in the September 30th issue. Here they are:

Congratulations to CBS [“TV Guide Plus: Going for the Gray–Producers Miffed as CBS Shuns Youth-Oriented Shows to Woo an Older Crowd,” Sept. 30]! It’s about time. If I never see another bleeping kid-oriented show on television, I will be the happiest person on earth. Now, if they would just realize that there are zillions of adults out here on Saturday mornings.
L.R.T.
Rancho California, Cal.

Guess what, CBS! I’m 41, educated and have teenage children. I like Bach, Chopin, rock ‘n’ roll and read avidly. Yes, I’m the “older audience” and I adore all the Golden Age TV shows, but I’m also a great fan of Julie Brown. Why? Because she’s funny. Funny is funny, whether you’re 20 or 40.
S. W.
Riverhead, N.Y.

Collins takes a look at Hollywood agent Al Floss, played by Alex Rocco on the new CBS sitcom The Famous Teddy Z, and tries to figure out whether creator Hugh Wilson based the character on real agents at the William Morris Agency.

Saturday, November 4th, 1989
8:30PM ABC (2) (6) (12) LIVING DOLLS (CC)–Comedy
Charlie (Leah Remini) fears her storybook romance with a handsome boy from a wealthy family will end once he learns of her background.

Sunday, November 5th, 1989
7PM FOX (19) (28) (45) BOOKER–Crime Drama; 60 min.
Booker (Richard Grieco) weaves a web of his own to snare the black widow he suspects of killing two husbands for the insurance money before she weds her Teshima-covered fiancee.

8PM ABC (2) (6) (12) FREE SPIRIT (CC)–Comedy
Winnie’s having fun, fun, fun doing all the driving in a convertible Thomas (Franc Luz) buys for her and Robb (Paul Scherrer) to share, until Robb tells daddy to take it away from her.

NBC (4) (5) (22) SISTER KATE (CC)–Comedy
Violet (Alexaundria Simmons) dreams up an imaginary friend the others resent because she’s a terrible snitch, but not a soul has a beef with Todd’s cooking after Kate (Stephanie Beacham) is laid up with a sprained ankle.

9:30PM FOX (19) (28) (45) OPEN HOUSE–Comedy
A phone call by Laura (Mary Page Keller) confirms her suspicion about a peculiar new client, who was once institutionalized for his violent aversion top pushy real-estate brokers.

Monday, November 6th, 1989
9PM FOX (19) (28) (45) ALIEN NATION (CC)–Drama; 60 min.
An astronomer is murdered before he can announce his discovery of an intelligent radio source with the same trajectory as the Newcomer slave ship. Meanwhile, a reluctant Sikes (Gary Graham) attends Cathy’s “mixed” party, and receives an inheritance from his late uncle.

Tuesday, November 7th, 1989
9PM CBS (7) (9) (10) WOLF (CC)–Crime Drama; 60 min.
The police suspect Tony (Jack Scalia) in the murder of an undercover cop investigating a gunrunning operation aboard a fishing boat. Meanwhile, a young woman rocks the boat with her claim that she’s the daughter of Tony’s late brother.

9:30 ABC (2) (6) (12) CHICKEN SOUP (CC)–Comedy
Molly (Alison Porter) is down in the dumps over her Catholic school father-daughter breakfast, so Jackie (Jackie Mason) consults a Father (George D. Wallace) and a Sister (Laura Waterbury) to find an uplifting solution.
[At press time, it was likely that ABC would air this episode, and not the one described in ABC’s ad for the program.]

Wednesday, November 8th, 1989
8PM CBS (7) (9) (10) PEACEABLE KINGDOM (CC)–Drama; 60 min.
While Rebecca (Lindsay Wagner) debates packing her trunks for a job back in New York, the end of an era is trumpeted at the zoo as Jed (Tom Wopat) tries unorthodox methods to save an elderly elephant on her last legs.
[Postponed from an earlier date.]

Thursday, November 9th, 1989
9PM CBS (7) (9) (10) TOP OF THE HILL (CC)–Drama; 60 min.
Tom (William Katt) finds himself straddling a fence, with his sister and angry Hopkins Bay neighbors on one side and the rights of a paroled rapist (Tim Ryan) on the other.

For viewers in 1989 excited about November sweeps, this issue may have been invaluable. Unfortunately, the same can’t be said for me. I id enjoy this week’s The Collins Report because it focuses on a character from the short-lived sitcom The Famous Teddy Z. Despite the start of sweeps, viewers of the opportunity to watch new episodes of most of the (ultimately) short-lived TV shows on the air in November 1989. One exception: The Famous Teddy Z on CBS.

That’s it for this issue. Check back next week for my review of the November 11th, 1989 issue of TV Guide. As always, hit the comments with any thoughts or reactions.