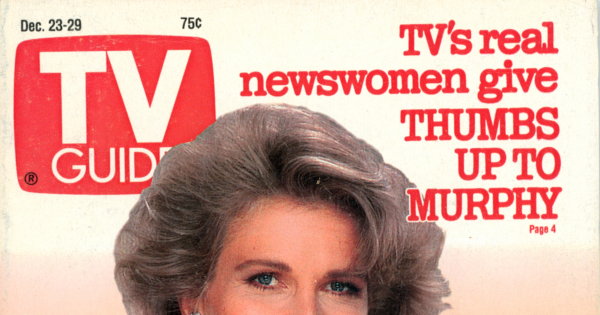 On the Cover: Candice Bergen, by Bernard Boudreau; Scott Bakula, by Timothy White/Onyx

This week’s issue includes six articles plus a picture feature:

I’ve only seen a few minutes here and there from multiple episodes of Murphy Brown but never an entire episodes from start to finish. So I skimmed the cover article, which features comments about the show and the character of Murphy Brown from the likes of Deborah Norville, Faith Daniels, Mary Alice Williams, Linda Ellerbee, and Jane Wallace. I skipped the short essay about Candice Bergen by Dick Cavett.

I am a fan of Quantum Leap, so I read every word of the profile of Scott Bakula. There are no behind-the-scenes tidbits about the show, unfortunately, just the revelation that Bakula had to get his own car phone because co-star Dean Stockwell got sick of letting Bakula use his.

Neil Hickey’s one-page article about the FCC’s syndicated exclusivity rule (taking effect January 1st, 1990) offers a very brief overview of the impact “syndex” will have on viewers. If it isn’t overturned by the courts, that is. Cable systems with more than 1,000 subscribers across the country may be forced to black out or replace TV shows on an out-of-town broadcast station if a local station airs the same show.

I skipped the article about the fall of the Berlin Wall and the one-page “The Scoop” profile of Bill Smitrovich.

Lawrence Eisenberg’s Grapevine includes tidbits about romance on the next season of The Hogan Family, how Neil Patrick Harris is thankful viewers accepted the premise of Doogie Howser, M.D., Norman Lloyd’s experience guest-starring on Wiseguy, and more. Alan Carter looks back at the Best of 1989 in Soaps. Mel Durslag’s Sports View tackles reactions to the NFL playing a game on Christmas night.

Prices from the Video Cassette Report for movies on VHS: Dial Help ($79.95), A Forgotten Tune for the Flute ($89.95), Great Balls of Fire ($89.98), A Nightmare on Elm Street 5: The Dream Child ($89.95), Road House ($89.95), Star Trek 5: The Final Frontier (N/A), Weekend at Bernie’s ($89.95). Cheers ‘n’ Jeers praises Ben Stein for his role on The Wonder Years, laments how the Rolling Stones and Paul McCartney sold out by doing commercials, applauds “the Grammy Living Legends” special on CBS, and criticizes Saturday Night with Connie Chung on CBS “for its continued use of dramatic re-creations.”

There are six news reports this week. The first explores how the Beach Boys are refusing to support an ABC made-for-TV movie.

Three of the six letters respond to an article about Victoria Principal published in the November 25th issue. Here are two:

How could a blind woman apply eye makeup as well as Principal did in this role? As an actress she should have held back on the powder and rouge for realism’s sake.
Mike C.
Chicago

Isn’t it about time for television viewers to see a blind character portrayed by a blind actor? With the exception of the occasional appearance by blind actor Tom Sullivan, we almost always see second-best–a famous sighted actor who is challenged more by the physical aspects of portraying the disability than by the true acting involved in portraying the character.
Jeanine M. W.
Washington, D.C.

9PM FOX (36) (28) (50D) ALIEN NATION (CC)–Drama; 60 min.
George (Eric Pierpoint) finds himself in trouble with the IRS, but in good with a Newcomer businesswoman, who shows her gratitude for a neighborhood drug bust with a gift–followed by a personal loan. (Repeat)

As always, the articles in this week’s issue were underwhelming at best. On television, there were repeats and repeats and more repeats.