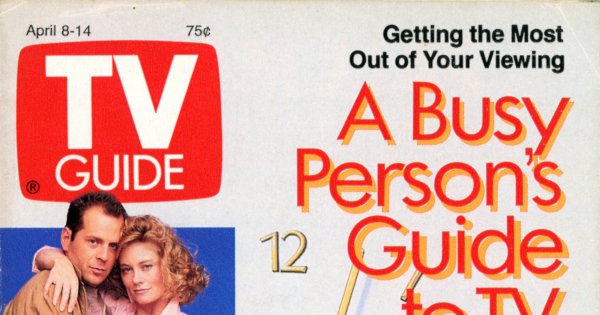 There are two good articles in this issue. David Handler examines the state of cable TV (all 34 channels!) to discover whether paying for cable is worth it. Even with just 34 channels, he only focuses on the “major entertainment” channels: HBO, Showtime, Cinemax, The Movie Channel, The Disney Channel, MTV, A&E Cable Network, and USA Netwrk.

HBO and Showtime both have their strengths and weaknesses. HBO offers solid made-for-TV movies, comedy specials, and documentaries. Its original series are “to put it plainly, crap.” Showtime is home to It’s Garry Shandling’s Show, the funniest sitcom on television, but its comedy specials and made-for-TV movies are disappointing. Cinemax and The Movie Channel may not be worth paying for if you’re already paying for HBO and Showtime. Handler very briefly covers TBS, TNT, Nick at Nite, and CBS Family Channel as well.

The article about Marlee Matlin is interesting. I had no idea she swore so much in 1989. I skipped the articles about Dionne Warwick, baseball, and Dear John (which I’ve never seen).

Prices from the Video Cassette Report for movies on VHS: Mystic Pizza ($89.95), Stealing Home ($89.95), Tougher Than Leather ($89.95). Cheers ‘n’ Jeers praises the Frasier-Lilith relationship on Cheers, applauds A&E Network’s As It Happened series, criticizes syndicated War of the Worlds for too much violence, and laments the use of body doubles on TV.

Merrill Panitt reviews Nightingales, declaring in the very first sentence the show “may be harmful to your health.” It’s a good thing the doctors are good at their jobs, he suggests, because the nurses aren’t able to concentrate on their jobs. “For some reason,” Panitt continues, “surely not its originality or dramatic merit, the show does well enough in the ratings. Could it possibly be because the shapely students spend so much time dressing and undressing and bouncing through aerobic exercises in skimpy outfits? Naah.”

Five of the ten letters respond to Stephen Birmingham’s article in the March 11th issue. Here are two:

Murphy Brown and thirtysomething are great shows, but anyone who’s really in knows the show to watch is Wiseguy.
Diana L. L.
Trumbull, Conn.

Birmingham says “it is more in to admire the old Star Trek reruns than to follow the tacky new episodes” of Star Trek: The Next Generation. Only if you’re over the hill or an old Trekkie. You might say I am of “the next generation,” having been born in 1965. The old Star Trek reruns are a combination of laughable special effects and a less than realistic captain. The new show is far superior.
Elaine G.
Georgetown, Texas

There are four In the News reports this week. One is a lengthy behind-the-scenes look at ABC’s new sitcom Anything but Love, which recently lost its creator and executive producer (and head writer) Wendy Kout, plus two other writers, due to friction with stars Jamie Lee Curtis and Richard Lewis. Also, a recent poll found that 47% of Americans prefer cable for entertainment programs compared to 27% who prefer broadcast television.

On the Grapevine contains four reports this week. First Lady Barbara Bush has taped a public service announcement about combating illiteracy, to air at the end of an episode of Kate & Allie. Also, ABC has renewed thirtysomething for another season.

According to The Ratings Race, NBC’s broadcast of the 1960 Peter Pan special won its time slot on Friday, March 24th with a 16.1/27 rating/share. Also, shows like Dynasty, Beauty and the Beast, Hooperman, and Falcon Crest are all “on the fence” for next season.

9PM ABC (24) (6) (7D) (21) GIDEON OLIVER (CC)–Crime Drama
Gideon (Louis Gossett Jr.) searches for an archaeologist who was “disappeared” while searching for gold artifacts in a Latin American nation ruled by a tyrant and torn by civil war.

Two very solid articles? This may be the best issue from 1989 I’ve reviewed yet.

That’s it for this issue. Check back next week for my review of the April 15th, 1989 issue of TV Guide. As always, hit the comments with any thoughts or reactions.