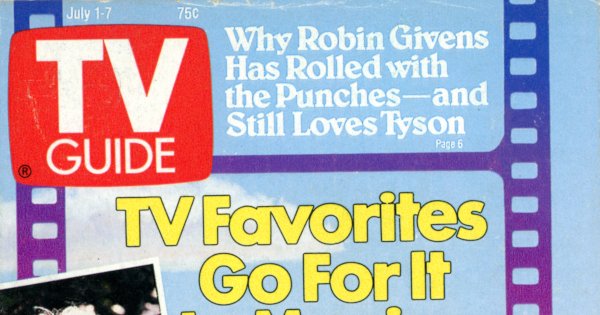 I can understand why readers in 1989 would be interested in an article about their favorite TV stars appearing in movies during the summer months. It doesn’t interest me thirty years later. I did read the article about the most dangerous jobs in TV, which include TV news helicopter pilot, grizzly-bear trainer, foreign correspondent, and stuntman. I also read the article about TV as a baby sitter even though the studies and information referenced are thirty years out of date.

I skipped the articles about Robin Givens and Marv Albert, plus a one-page profile of Paul Rodriguez.

[TV Guide Plus includes news reports and the following categories: On the Grapevine, and Soap Opera Guide.]

The In the News banner may be gone but TV Guide Plus still features news reports. There are four this week, including one about former CNN anchorwoman Mary Alice Williams reportedly being unhappy at NBC and another about Johnny Carson’s reaction to a new biography written about him.

On the Grapevine also contains four reports. Jaclyn Smith and Telly Savalas will join Burt Reynolds and Peter Falk in The ABC Mystery Movie this fall, with Savalas returning to the role of Kojak. Also, Martin Milner and Kent McCord will star in a made-for-cable movie called Nashville Beat on The Nashville Network on October 21st.

Two of the eight letters respond to a collection of “memos” written by Rebecca Howe of Cheers, published in the the May 27 issue. Here they are:

I really enjoyed the series of memos from Rebecca Howe to the Cheers gang [“Cheers Free-for-All: Rebecca Commits Memo-cide,” May 27]. It was as adorable and funny as Cheers itself!
Tricia M.
Tucson, Ariz.

I haven’t watched Cheers in over two years. Judging by Rebecca Howe’s memos, I haven’t missed anything.
Leslie N.
Honolulu

9:30PM CBS (11) (2D) (7) (10) (15) COMING OF AGE (CC)
For three weeks, party pooper Dick (Paul Dooley) is forced to improvise on meals and chores around the house while Ginny (Phyllis Newman) and their friends rehearse for the Dunes Theater Club production of “Oklahoma!”

Friday, July 7th, 1989
8PM CBS (11) (2D) (7) (10) (15) ADVENTURES IN BABYSITTING (CC)–Comedy
Bedlam precedes bedtime when Chris the baby sitter (Jenny Guthrie) leads the kids in her care on a daring escape during a convenience-store holdup. This pilot, based on the 1987 movie, is not on CBS’s announced fall schedule.

Viewers this week had not one, not two, not three, but four unsold sitcom pilots to watch. And plenty of repeats, too.

That’s it for this issue. Check back next week for my review of the July 8th, 1989 issue of TV Guide. As always, hit the comments with any thoughts or reactions.