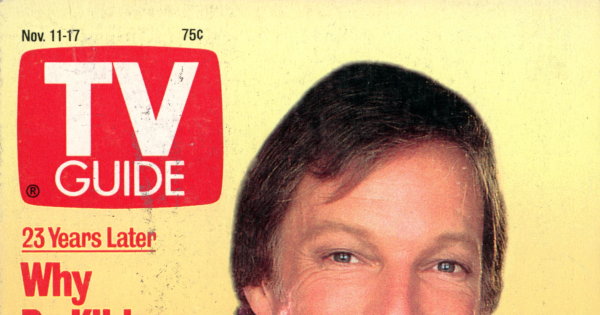 On the Cover: Richard Chamberlain, by Mario Casilli

I read this week’s cover article about Richard Chamberlain even though I’ve never seen Island Son (or Dr. Kildare, for that matter) and was disappointed that it didn’t feature any behind-the-scenes stories about the show. The focus of the article is on Chamberlain’s love of Hawaii and the Hawaiian lifestyle. “There’s a wonderful basic humanity here,” he explains, “an availableness on a very personal level, a real sweetness. It’s not puritanically sinful to enjoy life.” He hopes Island Son lasts long enough that it “takes on a more and more Hawaiian personality.” [It didn’t. CBS cancelled the medical drama after 18 episodes due to low ratings.]

I skimmed the profile of L.A. Law star Michele Greene, who I hadn’t heard of before (I’ve never seen L.A. Law).

I enjoyed the article about the “cable comedy wars,” which examines the upcoming launches of two new cable channels: Ha! The Comedy Network on April 1st and The Comedy Channel (TCC) on November 15th. Ha! plans to offer viewers a mix of old sitcoms like The Lucy Show and The Mary Tyler Moore Show, reruns of Candid Camera and Saturday Night Live, and original programming. The Comedy Channel, on the other hand, will fill its schedule with lengthy segments hosted by “comedy jockeys” who will introduce funny clips cut from movies and comedy specials. [Both channels struggled to attract viewers and merged in April 1991 to form CTV: The Comedy Network, which was renamed Comedy Central two months later.]

The profiles of A Martinez and Rena Sofer are typical TV Guide fare. I skipped the article profiling various comedians, the short article about why people need to laugh by Dr. Joyce Brothers, and the list of the best comedy videos.

Lawrence Eisenberg’s Grapevine includes tidbits about David Hasselhoff’s problems with scripts on Baywatch, Robert Loggia’s long days on the set of Mancuso FBI, changes for the second season of Freddy’s Nightmares, and more. Alan Carter examines how soap opera characters with no experience are routinely hired for important or dangerous jobs in Soaps. Mel Durslag’s Sports View tackles the best athletes according to network sportscasters like Jack Whittaker and Dick Stockton.

Prices from the Video Cassette Report for movies on VHS: Chances Are ($89.95), Miss Firecracker ($89.99), My Mom’s a Werewolf ($79.95), Scrooged (N/A), She’s Out of Control ($89.95), Teen Witch ($89.95). Cheers ‘n’ Jeers praises Dick York for his work supporting the homeless, criticizes The Famous Teddy Z for focusing too much on the main character’s family, applauds the PBS anthology series Trying Times, and laments how Kirk Cameron answered questions after inhaling a balloon full of helium during an interview.

Robert MacKenzie reviews crime drama Wolf this week. The star, former model Jack Scalia, is trying his best at acting but “any bit player who walks into the scene upstages him without trying,” MacKenzie declares. His character is boring and the show unrealistic. “The real problem here is that the series is built around a hero who isn’t defined and isn’t interesting, played by an actor who isn’t ripe yet, written by writers who think a cigar is a character and a postcard a place.”

There are seven news reports this week. The first reveals how Farrah Fawcett wasn’t sure she wanted to play a villain but agreed to do it because she was worried she was in “rut playing vulnerable, sympathetic women. And I hope we’re at least going to educate people a little about sociopathic behavior.”

Other reports: Mary Kate and Ashley Olsen are the most popular female performs on television according to TV Q; when Batman comes to home video (on November 15th), it may help shorten the time before blockbuster movies are released on home video; CBS will air a crossover between The Famous Teddy Z and Murphy Brown on November 13th, with Alex Rocco guest starring on Murphy Brown as talent agent Al Floss; Tri-Coast International released a hour-long video tape filled with footage from Zsa Zsa Gabor’s recent trial; it takes three aliens to make a baby on Alien Nation: two males and a female; ABC’s The Final Days flopped in the ratings, with the first hour actually finishing fourth in its time slot.

Two of the four letters respond to an article about Jamie Lee Curtis published in the October 21st issue. Here they are:

Jamie Lee Curtis works in a cliche-ridden town, but apparently she has not heard ‘Don’t bite the hand that feeds you.” Poor lady, she sounds like so many people who are extremely unhappy in their jobs. Life’s too short for that. Why doesn’t she pursue anther endeavor where her talents may bring rewards she never dreamed of? There is life outside the L.A. basin [“Jamie Lee Curtis: Dragon Lady–or Battler with a Cause?” Oct. 21.].
Joyce H.
North Fort Myers, Fla.

I had the opportunity to work with Jamie Lee Curtis recently, developing advertising for her upcoming film “Blue Steel.” It’s too bad the directors and crew of Anything but Love shrug, smirk, roll their eyes and otherwise patronize the “temperamental actress.” If they’d open up, I think they’d find someone who doesn’t just want her own way but who is willing to share the ideas, the work and the responsibility for the success of the series.
Sharon S.
Stamford, Conn.

Saturday, November 11th, 1989
8:30PM ABC (2) (6) (12) LIVING DOLLS (CC)–Comedy
Rick (David Moscow) thinks a girl in his class has her sights on him, but she’s focusing on Trish (Michael Learned), who could make things click for her in modeling.
[Postponed from an earlier date.]

9PM ABC CHRISTINE CROMWELL (CC)–Mystery; 2 hrs.
Debut: Jacyln Smith plays Christine Cromwell, a lawyer whose affluence and influence often draw her into the troubled affairs of friends and clients. In the opener, a childhood friend claims self-defense in the killing of her husband, a wealthy if despicable client of Christine’s firm.

8PM ABC (2) (6) (12) FREE SPIRIT (CC)–Comedy
Gene (Edan Gross) abuses Winnie’s niceness and gets her to “magic finger” an heirloom watch that he broke, but then he thinks he can get away with anything.

8:30PM ABC (2) (6) (12) HOMEROOM (CC)–Comedy
Daryl (Daryl Sivad) lets Lisa (Daphne Lyn Jones) direct her contest-winning play, but the real drama comes from behind the scenes when director and star have a falling out.

Monday, November 13th, 1989
8:3PM CBS (7) (9) (10) FAMOUS TEDDY Z (CC)–Comedy
It’s some enchanted evening as Teddy (Jon Cryer) meets a stranger across a crowded room, a beautiful–and newly separated–movie star who takes him to her home, where they really cook.
[Postponed from an earlier date. Now seen at this time.

9PM FOX (19) (28) (45) ALIEN NATION (CC); 60 min.
Someone is killing Newcomer catalysts, a special order necessary for reproduction that once included Albert (Jeff Marcus), who decides to return to the order and asist Susan and George (Michele Scarabelli, Eric Pierpoint) in having another child.

10PM CBS (7) (9) (10) ISLAND SON (CC)–Drama; 60 min.
In for a routine cancer checkup, a radio talk-show personality finds a fitting subject for his “Everyday People” show in a hospitalized vet who’s trying to prevent a big company from evicting the tenants from his low-income residential hotel.
[Postponed from an earlier date.]

Thursday, November 16th, 1989
9PM CBS (7) (9) (10) TOP OF THE HILL (CC)–Drama; 60 min.
Tom (William Katt) could blow his chance for a seat on the House Intelligence Committee when he tries to unearth a mole on the panel after a convicted spy insists he was framed.

Friday, November 17th, 1989
8PM CBS (7) (9) (10) SNOOPS (CC)–Mystery; 60 min.
Chance’s sister happens to photograph an exchange between the wife of a Central American official and a reporter, who says he’s on “the story of a lifetime”–just before he’s killed in a hotel room.

November sweeps continue this week, with high-profile movies and miniseries pre-empting regular programs like Free Spirit and Mancuso, FBI. The cover article about Richard Chamberlain is interesting, even if it doesn’t offer any useful behind-the-scenes stories about Island Son, the actor’s new (and ultimately short-lived) medical drama.

That’s it for this issue. Check back next week for my review of the November 18th, 1989 issue of TV Guide. As always, hit the comments with any thoughts or reactions.