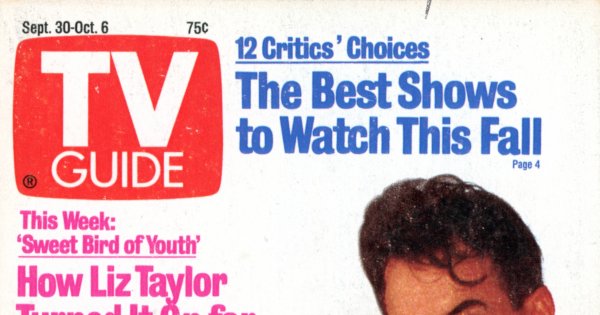 On the Cover: Elizabeth Taylor and Mark Harmon, by Jim Globus

TV Guide asked 12 television critics to pick the best (and worst) shows to watch this fall. The critics included Kay Gardella of The New York Daily Times, Tom Shales of The Washington Post, and Ken Tucker of The Philadelphia Inquirer. Among the best were L.A. Law, The Wonder Years, Roseanne, China Beach, The Famous Teddy Z, and Life Goes On. Among the worst were Baywatch, The Reporters, Amen, Just the Ten of Us, Homeroom, Rescue 911, and Unsolved Mysteries.

The three-page article about Elizabeth Taylor, star of NBC’s upcoming made-for-TV movie Tennessee Williams’ Sweet Bird of Youth, is dull. She showed up for work on time, chatted with the cast and crew during breaks in filming, and answered questions from the press “polity but sparingly, without an ounce more energy expended on self-revelation than is absolutely necessary.” The the four-page article about Arsenio Hall was equally underwhelming.

I skipped the one-page “The Scoop” profiles of Liz Sheridan, Dan Castellaneta, and Mark Mcewen, plus the one-page “Picture This…” feature about Bronson Pinchot.

Cheers ‘n’ Jeers praises the dancing on The Tracey Ullman Show, criticizes Sam Donaldson for a slip of the tongue, laments shocking footage of a bear falling into a power transformer shown on NBC Nightly News with Tom Brokaw, and applauds Alex Rocco for his role on The Famous Teddy Z. Prices from the Video Cassette Report for movies on VHS: Bambi ($26.99), Farewell to the King ($89.98), Gone with the Wind ($89.95), Lean on Me ($89.95), Speed Zone ($89.95).

Robert MacKenzie reviews ABC’s Full House. He is not a fan. “It’s all very cheerful and saturated with light–ever notice that there are no shadows in situation comedies?–but there are many sentimental moments, underling by syrupy music,” MacKenzie writes. “I guess this sort of happy goo doesn’t pose any threat to the environment,” he concludes, but it isn’t for him.

There are five news reports this week, one of which examines how CBS has shifted focus to older viewers and isn’t interested in youth-oriented shows. Other reports: Tracey Ullman’s Emmy win; Kathleen Sullivan’s criticism of CBS; NBC won’t repeat the made-for-TV movie I Know My First Name Is Steven any time soon, following the death of Steven Stayner; a three-hour edition of 48 Hours on September 14th earned a 13.4/24 rating/share, topping its competition from 10-11PM ET.

Two of the eight letters respond to an article the Miss America pageant published in the September 2nd issue. Here they are:

Why make such a big deal because Gretchen Carlson was crowned Miss America in 1988 [“A Beauty of a mistake: Miss America–Was Last Year’s Voting Suspect? Sept. 2]? We should be proud to have such an intelligent woman represent our country. She deserved this honor.
Marcia C.
Chicago

The Miss America Pageant may want to change its image to that of a “scholarship pageant” but it hasn’t strayed far enough from its origins as a bathing-beauty pageant. If it really wants to be considered seriously as a scholarship pageant, it should use grades, extracurricular activities, community service and motivation as criteria, just as other scholarship contests do. When was the last time you had to appear in a bathing suit to win a scholarship–unless it was an athletic swimming scholarship?
Ed S.
Seattle

Sunday, October 1st, 1989FOX (19) (28) (54) BOOKER–Crime Drama; 60 min.
Booker (Richard Grieco) misses “the pump” he got from the action on the street, but he gets it back when he’s marked for payback for the death of the gang member who shot Jump Street’s Judy (Holly Robinson).

8PM ABC (2) (6) (12) FREE SPIRIT (CC)–Comedy
The kids try to turn Thomas’ search for a date to a wedding into a Cinderella story by fixing him up with Winnie (Corinne Bohrer), but Thomas (Franc Luz) turns the plot into a botched version of “My Fair Lady.”

NBC (4) (5) (22) SISTER KATE (CC)–Comedy
Tomboy Freddy (Hannah Cutrona) plays a coquette to attract a guy in auto shop, and Neville (Joel Robinson) plays havoc with the peace in his search for an instrument he can play.

8:30PM ABC (2) (6) (12) HOMEROOM (CC)–Comedy
When the cafeteria manager (Lu Leonard) gets fed up with Donald’s misbehavior, Darryl (Darryl Sivad) devises a punishment that lets Donald (Billy Dee Willis) take a bit out of his crime.

9:30PM FOX (19) (28) (45) OPEN HOUSE–Comedy
Linda and Ted (Alison LaPlaca, Philip Charles MacKenzie) get to know each other a little better when a bear traps them in the isolated home of a prospective client.

Monday, October 2nd, 1989
8:30PM CBS (7) (9) (10) PEOPLE NEXT DOOR (CC)–Comedy
Walter and Abby wish Cissy could find the man of her dreams. Then a figment of Walter’s imagination–in the form of his old buddy Neal (Granville Van Dusen)–“pops in” unexpectedly and makes a solid impression on Cissy (Christina Pickles).

9:30PM CBS (11) (2D) (7) (10) (15) FAMOUS TEDDY Z (CC)–Comedy
Convinced that Teddy (Jon Cryer) is doing something illegal, Deena (Erica Youhn) visits his office, where once she understands the game, she has ideas for making Teddy a bigger player.

Tuesday, October 3rd, 1989
9PM CBS (7) (9) (10) WOLF (CC)–Crime Drama; 60 min.
A woman is kidnapped while under Tony’s protection, leaving Tony (Jack Scalia) saddled with an infant; and a young model Angie idolizes walks a tightrope in her efforts to stay thin.

Thursday, October 5th, 1989
9PM CBS (7) (9) (10) TOP OF THE HILL (CC)–Drama; 60 min.
Back home in Hopkins Bay, Tom (William Katt) gets involved when his best friend (Tony Fields) is killed after a bitter battle for the presidency of the local dockworkers union.

Friday, October 6th, 1989
8PM CBS (7) (9) (10) SNOOPS (CC)–Mystery; 60 min.
The sudden decision of her two-star-general father to resign his commission sends Micki (Daphne Maxwell Reid) to his superior officer, who admits to a falling-out with the general–just before he’s murdered on a firing range.

Aside from the article about love scenes on television, which was somewhat interesting, this week’s issue was more of the same. On television, much of NBC’s regular lineup this week was pre-empted in favor of baseball. Fans of baseball probably didn’t mind but anyone wanting to catch the next episode of new NBC shows like The Nutt House or Hardball may have been annoyed.

That’s it for this issue. Check back next week for my review of the October 7th, 1989 issue of TV Guide. As always, hit the comments with any thoughts or reactions.