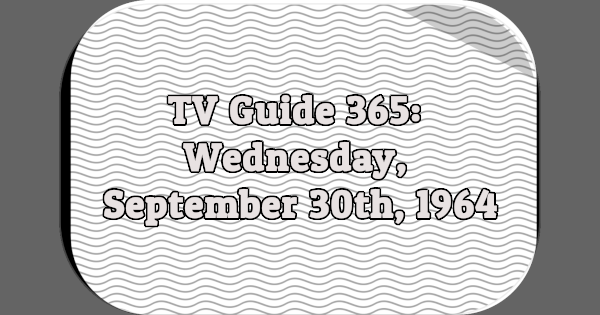 OZZIE AND HARRIET–Comedy (ABC)
To raise the fraternity’s scholastic average, the boys concentrate on their number one problem, Wally.

8:00 PATTY DUKE (ABC)
Cathy and her friends follow the advice offered in the high school newspaper’s lovelorn column, and they start losing their boy friends. They don’t know that the anonymous “Miss Lonelyhearts” is Patty.

9:00 DICK VAN DYKE (CBS)
“The Ghost of A. Chantz.” Mel Cooley invites the gang to a fishing lodge for a weekend, but neglects to make reservations. He bribes the desk clerk into giving them a vacant cabin by the lake, a cabin that has one tiny defect–it’s haunted.

MOVIE (NBC)
Wednesday Night at the Movies: “Green Mansions.” (1959) W. H. Hudson’s romantic classic about a Venezuelan gold-seeker who falls in love with Rima, the elusive “bird girl” living in the jungles of South America. Audrey Hepburn was directed in this film by her husband Mel Ferrer. Music by Villalobos. Choreography by Katherine Dunham. (Two hours)