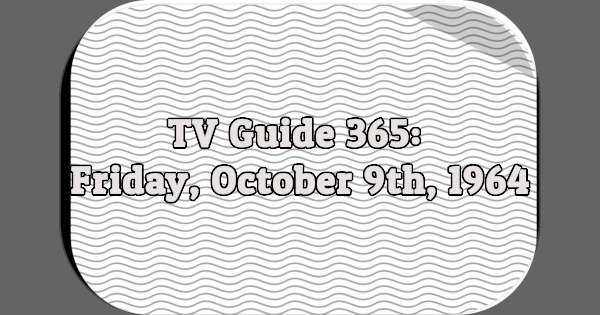 7:30 RAWHIDE–Western (CBS)
“Piney,” an old friend of Favor’s is digging for dollars by digging a tunnel beneath a bank. (60 min.)

JONNY QUEST (ABC)
[COLOR] “Pursuit of the Po-Ho.” A friend of Dr. Quest is taken prisoner in the jungle by the dreaded Po-Ho tribe.

8:00 FARMER’S DAUGHTER–Comedy (ABC)
“Past Perfect.” Katy finds a diary written by Glen’s late wife Ann, and as she reads, she “sees” Ann (who bears a startling resemblance to herself) romancing and marrying Glen. Inger Stevens plays both Katy and Ann.

BOB HOPE (NBC)
[COLOR] Janet Leigh makes her TV dramatic debut, co-starring with Bobby Darin in “Murder in the First.” A young law student is convicted of murdering a married woman he had fallen in love with, and an Associate Supreme Court Justice must decide whether the student’s basic rights were violated from the time of his arrest to his subsequent confession. Stirling Silliphant wrote the script. (60 min.)

ADDAMS FAMILY–Comedy (ABC)
Gomez is following family tradition by backing a loser in the town council election. The man’s a candidate who wouldn’t dream of draining the town marsh.

12 O’CLOCK HIGH–Drama (ABC)
“Pressure Point.” Sen. Clayton Johnson of the Appropriations Committee visits England to re-evaluate the whole Air Force program, and the senator is no friend of the Air Force or of General Savage. Script by John T. Dugan. (60 min.)