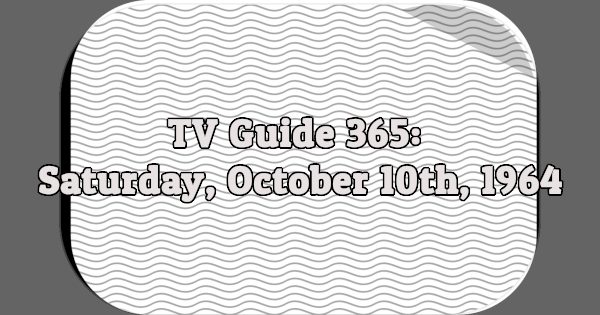 FLIPPER (NBC)
[COLOR] “The Gulf Between.” Well-to-do Kathryn Terrence is taking an interest in Porter, and Porter likes the situation. But Bud doesn’t.

OUTER LIMITS (ABC)
“Expanding Human.” Authorities are faced with an unusual break-in, theft and murder at a college where experiments are under way with drugs that intensify all human powers. (60 min.)

8:00 MR. MAGOO–Cartoons (NBC)
[COLOR] Magoo is Gunga Din in an adaptation of Rudyard Kipling’s tale of the fearless Hindu water boy who served in India with the Khyber Rifles.

8:30 GILLIGAN’S ISLAND (CBS)
The supply hut is robbed and, since no one’s on the island but our castaways, the skipper suggests that the group is the victim of voodoo.

LAWRENCE WELK–Music (ABC)
The music-makers recall melodies from their past nine years on TV: “Calcutta,” “Anniversary Song,” “Hey, Look Me Over,” “Tico-Tico,” “Alice Blue Gown,” “Say It with Music,” “I,” “Hello Dolly!” “Buck Dance,” “My Heart Still Remembers,” “Minnie the Mermaid,” “For Me and My Gal,” “Memories” and “South Rampart Street Parade.” (Live; 60 min.)

10:00 GUNSMOKE–Western (CBS)
Joe Silva has enemies who have sworn to kill him, but when Silva does meet his death, the wrong man is arrested for the murder. (60 min.)