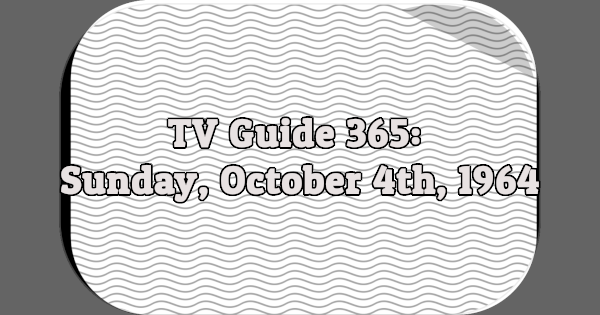 6:30 MISTER ED–Comedy (CBS)
In his first show of the new season, Carol warns Wilbur that shes going home to mother, so Ed offers to take on her duties around the house.
Postponed from last week.

CAMPAIGN AND THE CANDIDATES (NBC)
[SPECIAL] In Washington, Frank McGee is scheduled to moderate a debate between two top Democratic and Republican party leaders. (Live; 60 min.)

7:00 LASSIE–Drama (CBS)
Lassie encounters a young boy who’s in a hurry to grow up.

7:30 MY FAVORITE MARTIAN (CBS)
Tim’s finding it difficult to concentrate on one girl at a time, but Uncle Martin has a memory machine that can change all that.

WAGON TRAIN (ABC)
Embittered outlaw John Gillman doesn’t want any friends, But [sic] like it or not he has one: a little orphan girl named Abigail.

BONANZA (NBC)
[COLOR] “The Wild One” is gruff mountaineer Lafe Jessup, who’s in the middle of a brawl with Hoss when his Quaker wife shows up–the wife he has deserted.

MOVIE (ABC)
Sunday Night Movie: “The Facts of Life.” (1960). Kitty Weaver and Larry Gilbert, two middle-aged and middle-class suburbanites who are taken for granted by their respective mates, find themselves irresistibly attracted to one another. The film won an Oscar for costume design and received nominations for screenplay, photography and title song. (Two hours)

10:00 CANDID CAMERA (CBS)
The camera catches children as they watch a horror movie, people’s reactions when a little boy shoots them with a water pistol, a girl who sprays a cab with disinfectant before she gets in, and a man trying on a tropical suit who sees a “mirage.” A sequence filmed in Argentina shows people’s reactions to a painter who appears to be simultaneously falling off a ladder and spilling paint on them.