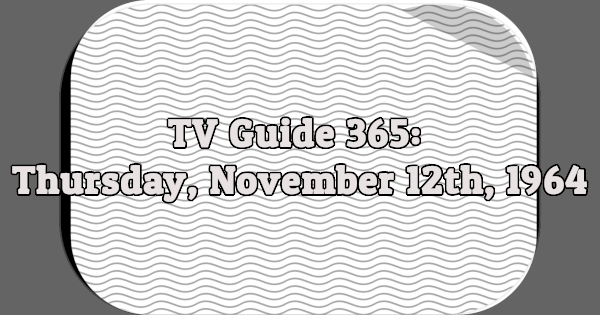 7:30 MUNSTERS–Comedy (CBS)
“Herman the Great.” Herman moonlights as a professional wrestler and finds he has all the qualifications but one: He’s too soft-hearted. The wrestlers and referee in this episode are portrayed by professionals.

DANIEL BOONE–Adventure (NBC)
“The Sound of Wings.” A Redcoat officer slugs Boone and assumes his identity–so he can persuade the Indians to back the British. (60 min.)

8:00 PERRY MASON (CBS)
“The Case of a Place Called Midnight.” In a major departure for this series, Mason travels to Europe and becomes involved in international intrigue. Perry’s in Europe on Business, and as a favor to the wealthy Ralston family, he goes to Switzerland to see what sort of girl young Frederic Ralston is planning to marry. (60 min.)

8:30 DR. KILDARE–Drama (NBC)
“Rome Will Never Leave You,” first of three parts. Kildare accompanies Gillespie on a research trip to Rome, where he’s captivated by the city’s customs and people–and particularly the exquisite Francesca Paolini, daughter of an Italian nobleman. Script by Sally Benson. (60 min.)

MY THREE SONS–Comedy (ABC)
Ernie and Chip are playing private detectives, and they’re sure they’re on to something big when they see Mike keeping company with a strange woman.

BEWITCHED (ABC)
Samantha’s bored because Darrin’s tied up at the office, so he agrees to go to lunch with her mother–in Paris.

9:30 HAZEL (NBC)
[COLOR] “Just Me, Harold and the Unisphere.” Hazel enters a contest that offers a free trip to the World’s Fair.

10:00 DEFENDERS–Drama (CBS)
“A Taste of Ashes.” Preston takes on the defense of two men who’ve been charged with committing murder to save their own lives. Script by David W. Rintels. (60 min.)

KRAFT SUSPENSE THEATRE (NBC)
[COLOR] “The Kamchatka Incident.” The destinies of several passengers flying from Japan to the U.S.–including an important Russian defector–hang in the balance as engine trouble and bad weather force their plane off course and into Soviet air space. (60 min.)

SOPHIA LOREN IN ROME–Documentary (ABC)
[SPECIAL] [COLOR] Marcello Mastroianni joins Sophia on this tour of the Eternal City. For details, see the Close-up on page A-70.

Sophia Loren, a Neapolitan by birth but a Roman by choice, shows off her adopted city in this 60-minute tour. She’s given a brief, humorously lackadaisical assist from another Neapolitan who’s also an international star: Marcello Mastroianni.