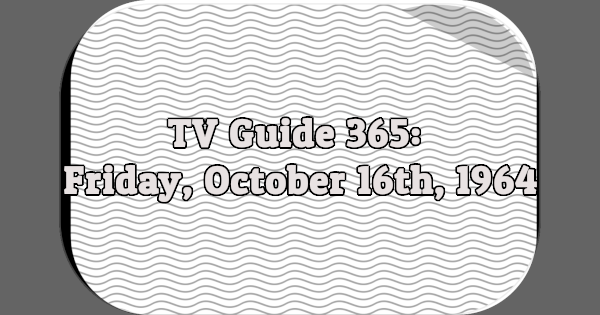 7:30 RAWHIDE–Western (CBS)
“The Lost Herd.” Favor tries to beat another drive to market by taking a dangerous pass, but loses his herd in a stampede over a cliff. (60 min.)

8:00 FARMER’S DAUGHTER–Comedy (ABC)
Danny reads his English composition in There’s a [sic] “Scandal in Washington” after class. It seems he included a juicy piece of gossip about Glen and Katy.

BOB HOPE (NBC)
[COLOR] Bob heads an all-star cast in “Have Girls–Will Travel.” Details are in the Close-up on opposite page. (60 min.)

ADDAMS FAMILY–Comedy (ABC)
The Addamses are jolted into examining their family tree when a snide neighbor charges they lack breeding.

9:30 GOMER PYLE, USMC (CBS)
“Captain Ironpants” is a lady Marine Corps officer, and Gomer makes the ghastly mistake of tipping his hat to her instead of saluting.

JACK BENNY–Comedy (NBC)
Jimmy Stewart and his wife Gloria are Jack’s guests. The Department of Internal Revenue is investigating Jack’s income tax return–because they can’t get over how much he makes and how little he spends.

12 O’CLOCK HIGH–Drama (ABC)
“The Sound of Distant Thunder.” Lt. Andy Lathrop may be a hick, but he’s also a resourceful, accurate bombardier–so Savage sets out to make him a career man. Script by Edward J. Lakso. (60 min.)