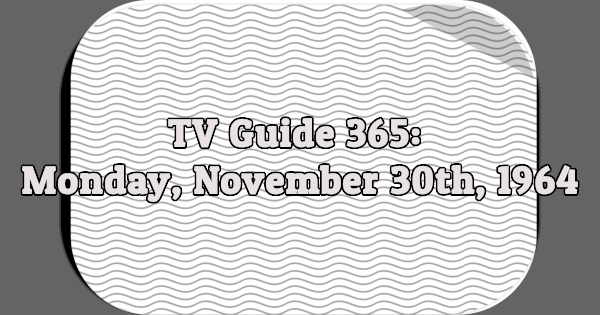 [SPECIAL] In this second of the season’s “Young People’s Concerts,” Leonard Bernstein takes a “fond look backward” to the 19th Century, when music had a distinctly national flavor.

VOYAGE (ABC)
“No way Out.” The Seaview, anchored off the Java coast, is awaiting a very important passenger–Anton Koslow, a defector to the Wet, who has information on the Red spy network. (60 min.)

ANDY GRIFFITH–Comedy (CBS)
Andy wants Aunt Bee to try out for the lead role of Lady Mayberry in the town’s centennial parade..

9:00 LUCILLE BALL (CBS)
Lucy’s sure that having a maid would be a saving–even if she has to go to work to afford one.

10:00 HALLMARK HALL OF FAME–Documentary (NBC)
[SPECIAL] [COLOR] “The Other World of Winston Churchill.” For details, see the Close-up, page A-31. (60 min.)
Alfred Hitchcock is pre-empted.

[SPECIAL] [COLOR] On the occasion of his 90th birthday, “Hall of Fame” honors Sir Winston Churchill with a detailed study of his life as an amateur painter. Based on Churchill’s book “painting as a Pastime.” the program traces Churchill’s nearly 50 years of artistic effort. Included are films of his paintings and the environments that inspired them.

BEN CASEY–Drama (ABC)
“Kill the Dream but Spare the Dreamer.” On temporary duty at a veterans’ hospital, Casey clashes with the head of neurosurgery, who devotes more energy to boosting patients’ morale than to surgery. Script by Lionel E. Siegel. (60 min.)