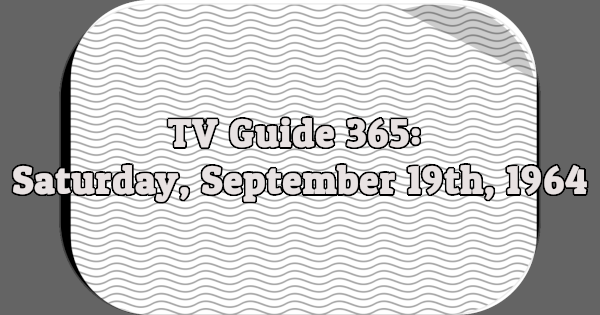 7:30 LUCY-DESI–Comedy (CBS)
“Lucy Wants a Career.” Lucy, bored with being a homebody, gets a job as “girl Friday” for a TV show starring actor Paul Douglas. Her shenanigans infuriate Douglas, but the sponsors are impressed. (60 min.)
Last show of the summer. Jackie Gleason returns in this time slot next week.

FLIPPER (NBC)
[DEBUT] [COLOR] A dauntless dolphin–almost an aquatic Lassie–has the title role in this half-hour adventure series. The human stars are Brian Kelly as widower Porter Ricks, a marine preserve ranger in the Florida Keys; and Luke Halpin (as Sandy) and Tommy Norden (as Bud), his two sons. Tonight: “300 Feet Below.” Having been attacked by sharks on the open sea, Dr. Bill Darmon radios Porter for help.

OUTER LIMITS (ABC)
The series orbits into its second season with “Soldier.” A soldier of the future, trained only to kill, finds himself suddenly transported into the past … his past, but our present. (60 min.)

8:00 MR. MAGOO–Cartoons (NBC)
[DEBUT] [COLOR] The myopic Mr. Magoo bumbles onto the TV screen in this half-hour animated series that presents a different legendary tale each week. Magoo (voice by Jim Backus) acts as host and often portrays the story’s hero. Tonight: “William Tell,” with Magoo as the legendary William.

9:00 MOVIE (NBC)
[COLOR] Saturday Night at the Movies: “The Mating Game.” (1959) The future of the wacky Larkin family is threatened when the outraged Internal Revenue Service discovers that they’ve never paid any income taxes. (Two hours)

10:00 GUNSMOKE–Western
Festus Hagen’s cousin Mayblossom comes to Dodge to search for a husband, and Festus appears to be the leading candidate. Mayblossom says that they are destined to wed because of a pact their daddies made long ago.