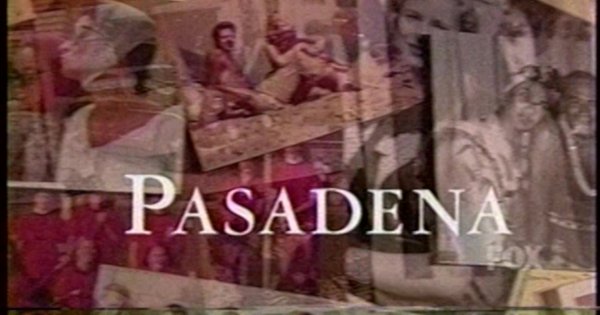 Let’s Remember is an opportunity for those who watched relatively recent short-lived TV shows, as well as those who didn’t, to share their thoughts and memories, to help ensure that these shows aren’t forgotten. This month’s column examines Pasadena (FOX, 2001).

Here’s a lengthy synopsis of Pasadena from the show’s official Sony Pictures website (via The Wayback Machine):

Wealth, power, influence and prestige – the Greeley family has everything. And never have they been so close to losing it all.

Born into the most prominent family of Pasadena, California, 15-year-old Lily McAllister (Alison Lohman) has lived a charmed life. She is beautiful, intelligent and has never wanted for anything. The influence of her family has been widely felt as well. Her mother, Catherine (Emmy-winner Dana Delany), whose life is filled with insecurity, self-involvement and the need to protect the family image, fights to run her own household while seeking approval of her own mother. Catherine’s husband, Will (Martin Donovan), is a doting father who, by marrying into the Greeley family, has seemingly secured his future as a player in the Greeley empire. Catherine and Will’s youngest, Mason (Christopher Marquette), is the typical pre-adolescent youth, oblivious to the deception that surrounds him. For now.

Initially, Lily has grown up proud of her family’s illustrious history and philanthropic accomplishments. But one night, Lilly’s picture-perfect existence is torn apart when she is surprised by an intruder. The unhinged stranger, Phillip Parker, pulls a gun on Lily and threatens her before inexplicably taking his own life in her family’s living room. Lilly is shaken by the violent encounter, but it is her family’s elaborate cover-up of the suicide that truly disturbs her. With the help of her new classmate, Henry Bellow (Alan Simpson), a handsome scholarship student with resentment for the Greeley family money, she embarks on her own investigation into Parker’s identity and mysterious death.

The other members of Lily’s family are involved in their own personal tribulations. Robert Greeley (Mark Valley) is fighting for control of the Greeley empire while at the same time protecting his sister Catherine from her philandering husband. Nate Greeley (Balthazar Getty), the black sheep of the family, is dealing with a lack of ambition and a drug habit that keeps him focused only on himself. Beth Greeley (Natasha Gregson Wagner), seemingly quiet and demure, is struggling to live the life she wants to live while still trying to please her parents.

As Lily continues her search into the mysterious death and what her family is really all about, it is not long before she discovers that her parents, grandparents and just about every member of her family are trying to bury a slew of other secrets. Even her confidant, Henry, seems to have a few secrets of his own. As we unravel the mystery, twists and turns will reveal there is much more to this family than meets the eye.

-FOX pre-empted Pasadena on October 12th for a special episode of America’s Most Wanted and again on October 19th for Major League Baseball.

-After yanking Pasadena off the air due to low ratings, FOX aired repeats of 24 from 9-10PM ET on Fridays until February 2002 when Dark Angel moved into Pasadena‘s former time slot.

-Defunct cable channel SoapNet aired all 13 episodes of Pasadena, including the nine not seen on FOX, on Saturdays at 7PM ET from Saturday, October 1st through Saturday, December 24th, 2005. Cable channel Oxygen later aired a marathon of the entire series on Monday, September 3rd, 2007 (Labor Day) from 8AM-9PM ET.

-You can find summaries for the four episodes FOX aired and the nine unaired episodes later shown on SoapNet at TV Guide.

Go to that dark place ASAP. The opening hour, directed by Diane Keaton, is an inert mess of exposition hampered by suffocating narration by [Alison] Lohman (which producers promise to tone down). Besides, why would anyone squander one of the season’s most glittering casts?

Two sets of opening credits are available on YouTube:

I have no recollection of watching Pasadena. I wasn’t then and I’m not now a fan of prime time soap operas. Yet for some reason I taped the series premiere on VHS and still have it. I don’t think I watched that first episode, either when it aired on FOX or later on VHS. If I did, I’ve completely forgotten it.

My copy of the series premiere is missing the first minute or so but is otherwise complete. I didn’t watch the whole thing while researching this column but I saw enough to notice the “suffocating narration” mentioned in TV Guide‘s 2001 Fall Preview issue.

Nowhere. Pasadena has never been officially released on DVD nor is it streaming anywhere. You can watch clips on YouTube, however.

Hit the comments with your thoughts and memories to ensure Pasadena doesn’t slip into total obscurity.