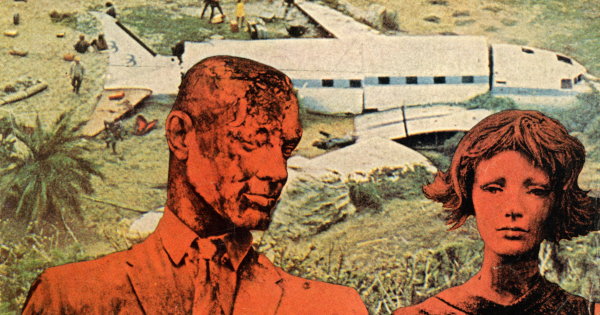 This month marks the 45th anniversary of the premiere of ABC’s The New People, my very favorite TV obscurity, so it seems like the perfect time to review the first of the show’s two tie-in comic books published by Dell. I purchased my copies of the both issues on eBay many years ago and put together an exhibit featuring them back in 2008, which you can find here.

I’ve reviewed a number of tie-in comics over the years, including Star Trek #10 (Gold Key), Bonanza #25 (Gold Key) and The Young Rebels #1 (Dell), and in many of the reviews I’ve mentioned that the likenesses of the characters as depicted in the comics aren’t always very accurate. This issue sidesteps that problem entirely by not using any characters from the show at all.

Included are two stories. The first is called “For the Guilt of One…” and runs 16 pages. It stars a selfish young man named Jamie Foyle, who spots a ship on the horizon and immediately claims it for himself. Even after learning that the ship is actually just a derelict boat, Jamie’s obsession with it only grows. He swims out to the boat at night and when some of the other survivors arrive the next morning, points a gun at them and threatens to shoot anyone who attempts to board it.

Although he eventually relents and allows others to help repair the boat, Jamie refuses to put down the gun or leave the boat. When several other young men attempt to sneak board at night and overpower him, Jamie shoots one before being captured. Still wearing the captain’s hat he found on board, Jamie whimpers as he is chained up, worried he is about to be whipped and calling it inhuman. Not surprisingly, he’s found guilty and sentenced to solitary confinement until the survivors are rescued.

I won’t spoiling the ending but let’s just say things don’t turn out too well for Jamie or the boat. The story touches upon some of the themes explored in the TV series, among them the prospect of finding or building a boat and dealing with legal matters and the lack of law on the island. 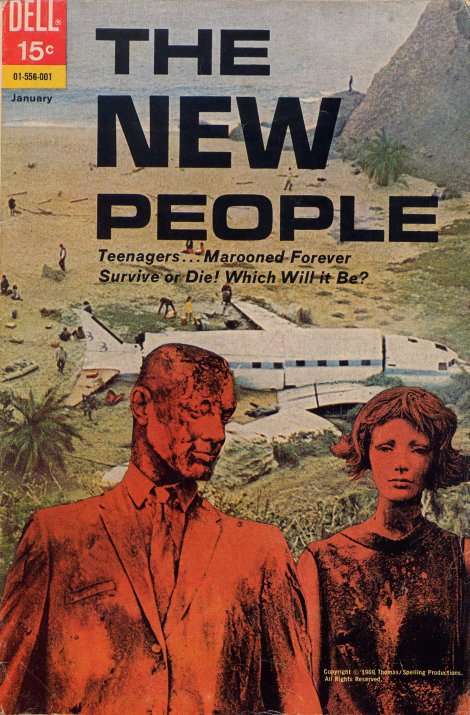 The second story is called “Sole Survivor” and also runs 16 pages. It begins with a car nearly hitting several survivors before crashing. Behind the wheel is Alf, who doesn’t think there’s anything work living for on or off the island. He stalks off, scaring some of the others. They set aside their worries for lunch, which is canned soup found in a warehouse. Although one woman is worried that there might be something wrong with the food on the island, that doesn’t stop her from sampling the soup.

Almost immediately, she and all the others collapse. There was something wrong with the soup. Alf is the only one unaffected. When he returns to town and finds everyone else on the ground, he assumes they’re dead, which pushes him over the edge. Alf runs off into the woods screaming about not wanting to be the last person alive and proceeds to fall off a cliff, breaking his leg.

Somehow, Alf manages to stumble back to town but not before encountering a poisonous snake. Once back, he finds the warehouse with all the supplies on fire. After putting out the fire he runs into a wild boar, which he somehow kills. Unlike the first story, this one ends happily for all involved (except, of course, for the boar). An early episode of the TV show involved a deadly illness but there was nothing quite like this as far as I know. 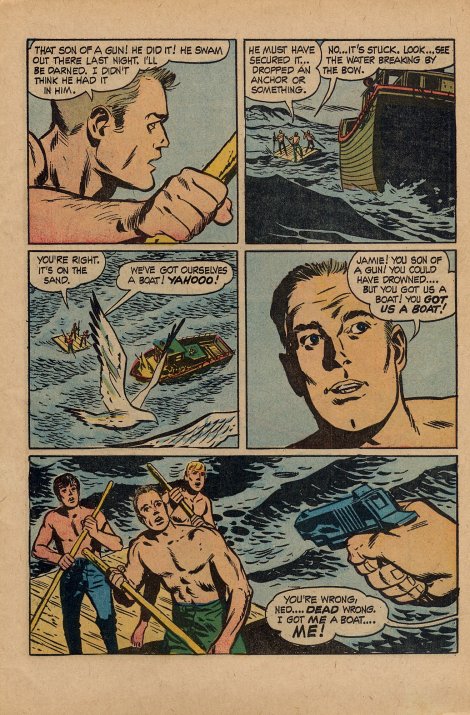 This comic book was a big disappointment, primarily because it didn’t feature any characters from the TV show but also because the stories are pretty weak. I didn’t read it thoroughly years ago when I was putting together the exhibit because I didn’t want to. I’ve only seen the first episode of The New People and the odds of it being released on DVD or made available for streaming are slim at best. That means the two comics and the tie-in novel are all I’ve got. So I put off reading the comics, wanting there to always be something new about The New People. There’s still the second issue but I doubt it’s any better than the first.

Note that the cover to this issue features a scene from the TV show featuring the crashed plane as well as two of the red mannequins the survivors found left behind on the island by the Atomic Energy Commission that planned to use it as a test site.

I would be very curious to know if anyone who watched The New People back in 1969 remembers reading this comic and if so what they thought of it. I have to think anyone who watched the show regularly and was a fan would expect a comic book based on the TV show to feature characters for the TV show. So was reading this a disappointment or was it just enough to have a comic book based on The New People to read, even if it didn’t reflect what was seen on TV?