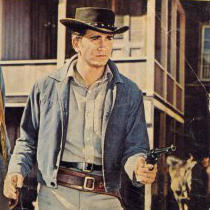 This issue contains two full stories. In “The Fugitive” (which is marked “Reprinted by Popular Demand”) follows the Cartwrights as they attempt to protect newlyweds Terry and Conchita from El Cuarto, “the richest (and the cruelest) land owner in California!” El Cuarto was betrothed to Conchita but she and Terry stole away and married secretly, then fled. In “Sore Loser,” a hired hand Ben fired to cheating at horse shoes attempts to get his revenge by killing a herd of steer. 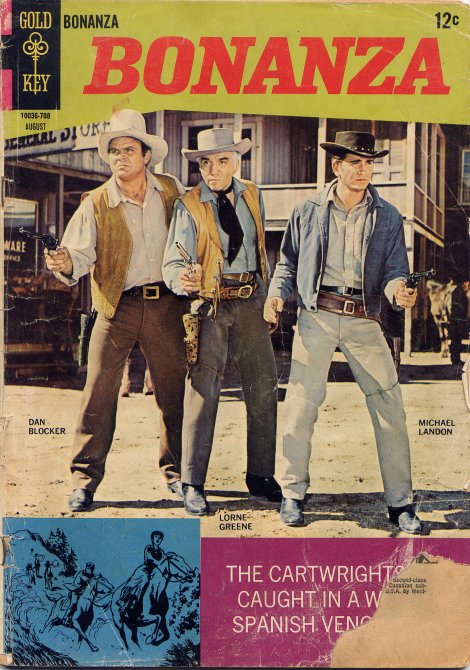 The dialogue is simplistic and at times stilted (Hoss: “And we sure made him look foolish! Haw, haw!”). Poor Conchita is used solely for exposition and the occasional exclamation (“Terry! Terry mio! (sob!)”). The artwork allows for relatively distinct characters that bare almost no resemblance to their television or real life counterparts. At times, if not for his white hair, it would be impossible to recognize Ben Cartwright. There could have been legal reasons why the likenesses of Lorne Greene, Dan Blocker and others couldn’t be used. 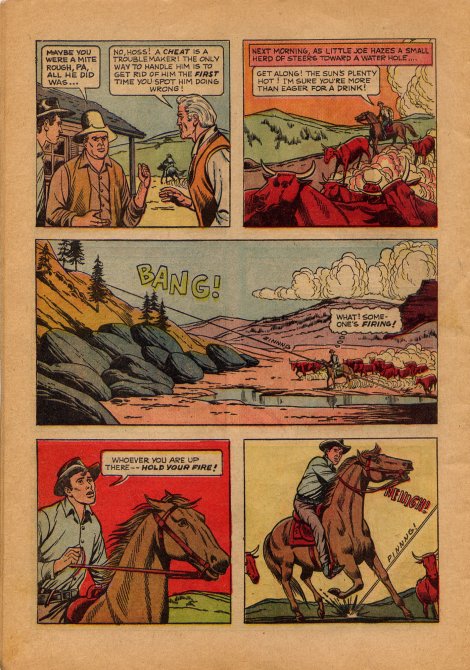 By 1967 Pernell Roberts had left Bonanza so only Lorne Green, Dan Blocker and Michael Landon are pictured on the cover. In the first story, which was reprinted, Adam Cartwright is included in several scenes but has no dialogue. In the second story, which was apparently new to the issue, Adam is nowhere to be seen, suggesting that in the comic book universe, he had also left the Ponderosa.

One Reply to “Bookshelf: Bonanza #25”