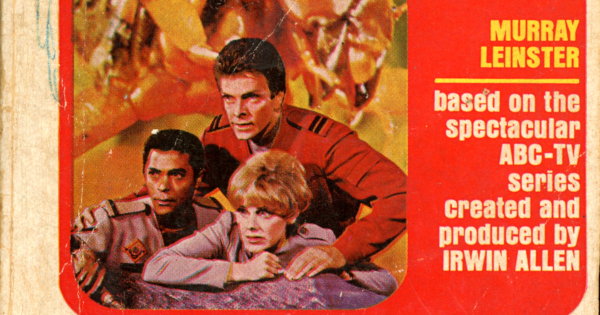 The Hot Spot is the second of three tie-in novels based on Irwin Allen’s Land of the Giants. All were written by Murray Leinster. It finds the passengers and crew of the Spindrift setting down on an island they hope is uninhabited. I don’t know if its a novelization of another episode of Land of the Giants (however loosely based it may be). My assumption would be that it isn’t. It does include the character of Marjorie, who was introduced in Leinster’s first Land of the Giants novel which was based in part on the pilot episode. Marjorie was never seen on the television series. In the novels, she was a passenger on another suborbital flight on Earth that somehow wound up on the Land of the Giants.

Captain Steve Burton decides to seek refuge on an island in the hopes that the giants they encountered earlier (in the first novel) will think they’ve disappeared for good. If they don’t have to worry about being captured by the giants they can turn their attention to trying to get back home. Unfortunately, the island they land on is inhabited. 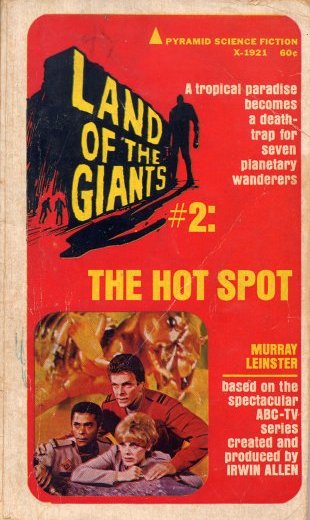 There are giant spiders with giant spiderwebs. And the Spindrift is caught in one such web. Steve is forced to confront the monstrous, eight-legged creature before he and the others can tackle the sticky webbing covering the Spindrift. But another spider comes along, one trailing sacks of its eggs behind it. Inside could be hundreds of tiny spider babies — tiny to the giants but disturbingly large to humans.

Then, to make matters worse, a boat arrives at the island. It is a giant ship with giants aboard. Is it a simple fishing boat, going about its daily business, or has it somehow tracked down the Spindrift? There’s a centipede attack. The giants hunt wild hogs. And one of them finds the Spindrift. Aboard are Dan, Wilson, Valerie, Betty and Marjorie.

Steve, Fitzhugh and Barry (with Chipper the dog) must make their way to the giants’ boat, sneak aboard, get into the Spindrift and somehow blast off before the giants realize what they’ve found. They manage to do so but then things get even worse. They have to make repairs and to do so they have to land back on the island.

The Hot Spot is chock full of problems for the Spindrift. Just when it looks like they’ve made it out of one bit of trouble they find themselves in another. The giants fire rockets at the Spindrift, hoping to destroy it. Steve and the others venture out into a giant farm looking for food. Once inside, they become trapped. After escaping they decide to try to trick the giants into thinking a whole fleet of tiny ships are flying about the planet. 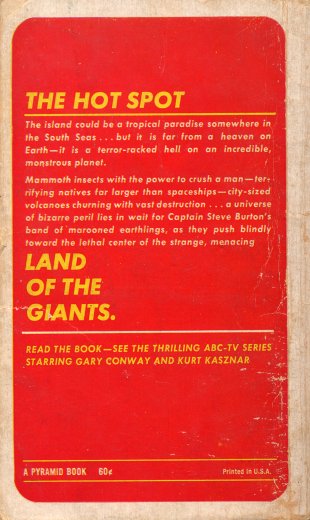 Land of the Giants #2 Back – Copyright 1969 Pyramid Books

I thoroughly enjoyed The Hot Spot, despite the fact that at the time I read it I hadn’t seen a single episode of Land of the Giants. I still haven’t. Maybe one day soon I’ll be able to find the time to sit down and watch a few episodes. If they’re anything at all like this novel, I’m sure I’ll like them.

Plus, there’s still the third tie-in novel, Unknown Danger, that I have to read. The Hot Spot ends with Wilson calculating that the same space warp that brought them to the Land of the Giants is going to reappear. Steve pilots the ship towards it. Does Unknown Danger pick up where The Hot Spot leaves off? I don’t know. If I ever get my hands on a copy we’ll see.

One Reply to “Bookshelf: Land of the Giants #2 – The Hot Spot”