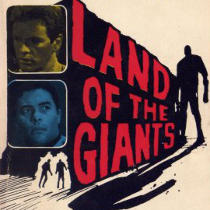 I’ve never seen Land of the Giants, although I want to. All 51 episodes have been available for free through Hulu for years but I just haven’t had the time to sit down and watch any. That’s unfortunate because Murray Leinster’s Land of the Giants appears to be based–at least in part–on the the pilot episode. The word “novelization” isn’t mentioned anywhere (the cover states that it is “based on the spectacular ABC-TV series”) but the novel chronicles the journey of the Spindrift from Los Angeles to the Land of the Giants. 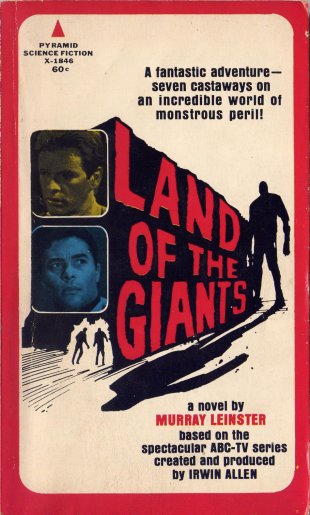 Because I haven’t seen the pilot episode of Land of the Giants I can’t say how similiar the story in the novel is. The series premiered on September 22nd, 1968 and Land of the Giants was first published in September of 1968. So it must have been written some time earlier. It’s likely Leinster was working with scripts and production material when he wrote the novel so even if he was trying to stick close to the plot of the series there could easily be differences resulting from changes made during production of the series.

In any event, Land of the Giants begins by introducing the crew of the Spindrift: the pilot, Steve Burton, the co-pilot, Dan Erickson, and the stewardess, Betty Hamilton. Interestingly, the passengers, aside from young Barry and his dog Chipper, aren’t even named for quite a long time. Valerie Scott (often referred to as “the girl”) is named on page 47. The remaining two passengers — Fitzhugh and Wilson — are introduced on page 50 but never get first names. The bulk of the novel revolves around Steve Burton and Dan Erickson. That may be the way episodes of the series worked as well.

One aspect of Land of the Giants that I don’t believe was reflected in the television series was the introduction of Marjorie. She’s found caged in a shed, a captive of two giants who also capture Valerie. Steve frees Valerie and later returns with others to save Marjorie, who reveals that she was a passenger on another ship like the Spindrift (the Anne) that crashed on the Land of the Giants. The others are all dead. Marjorie returns in the second Land of the Giants novel, also written by Murray Leinster, and may be an original creation of his. 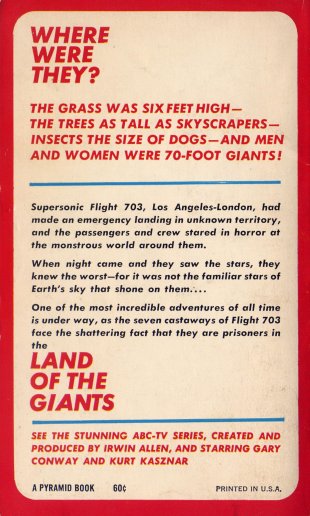 Land of the Giants Back – Copyright 1968 Pyramid Books

Perhaps once I get a chance to watch the pilot episode of Land of the Giants I’ll revisit this novel. But as someone who hasn’t seen the show, it was a fun read. Leinster does a fine job explaining the “science” that brought the Spindrift to the Land of the Giants. And he makes the giant’s society seem real. I’d be interested in what a fan of Land of the Giants thinks of the novel. Is it an interesting take on the concept of the series or are the differences frustrating?

2 Replies to “Bookshelf: Land of the Giants”