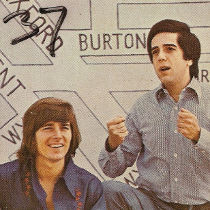 Last August I reviewed the first TV tie-in novel based on ABC’s Getting Together so this month seemed like the perfect time to review the second. For those not familiar with the sitcom, it was a spin-off of The Partridge Family that starred Bobby Sherman as aspiring singer-songwriter Bobby Conway, who can’t write lyrics, and Wes Stern as his tone deaf best friend Lionel Poindexter, who is a wonderful lyricist. The two lived in a furniture/antiques store with Bobby’s younger sister Jenny (played by Susan Neher). It ran for just 14 episodes from September 1971 to January 1972. Despite its lack of success on the air, it produced not two tie-in novels and a tie-in comic.

I haven’t seen any episodes of Getting Together, which received the spotlight treatment here at Television Obscurities back in 2010, but I enjoyed reading the first tie-in novel last year. I liked the second one even more. Getting Together #2 – Bobby: Superstar runs about a dozen pages shorter than Getting Together, so it was a very fast read. My one criticism of the first novel was its occasional use of foreshadowing at the end of several chapters that felt unnecessary. Thankfully, that’s not repeated in the second novel. Unlike the first, it doesn’t feature the characters of Rita (played by Pat Carroll), who owned the antiques store where Bobby, Lionel, and Jenny lived, or her police officer boyfriend Rudy (played by Jack Burns).

The plot involves Bobby being drafted by the California Condors, the worst team in professional football. A computer mix-up led to Bobby Conway being sent Bobby Joe Conway’s final invitation to attend rookie camp at Campesino College. He decides to go for two reasons. First, the biggest Condors star is Joby Deane, who also happens to be a popular new rock singer, and Bobby thinks if he can get close to Joby maybe he can convince him to use some of their songs. Second, newspapers are bound to want to write about an imposter at rookie camp and Bobby could sure use the publicity. Lionel and Jenny aren’t entirely convinced but Bobby has his mind made up. He played football in high school and knows he can hold his own for a day or two.

While Bobby is at rookie camp learning all about plays and tackles, Lionel and Jenny scramble to find him after a band called the Thankful Zombies ask for a few songs for their new album. Jenny can’t get in touch with Bobby by phone so Lionel heads to Campesino College to try to track him down. Unfortunately, the football players are locked down tight. Nobody can talk to them. Lionel strikes up a friendship with a pretty coed named Beth who just happens to be in charge of planning the benefit concert Joby will be headlining. Can she help find Bobby? If not, how will Lionel write the songs for the Thankful Zombies?

Back cover to Getting Together 2 – Bobby: Superstar – Copyright 1971 Columbia Pictures Industries, Inc.

Given Bobby Sherman’s status as a teen idol, younger viewers likely made up the bulk of the audience for Getting Together and the tie-in novels were no doubt aimed at them as well. There’s not much room for romance between all the football talk but Bobby somehow manages to find the time to develop a crush on Beth and become intensely jealous when her affections are showered on someone else. None of the characters are very developed but Beth is little more than eye candy. Here’s how she’s described when Lionel first meets her:

She was about his size, which made her about average for a girl, with short blonde hair that bounced a lot when she talked. Her eyes were big and round, her nose small and perky above a generous mouth that looked as though it couldn’t help smiling. In a blouse and miniskirt the rest of her was decidedly smileworthy, too, and even Lionel noticed.

Later, at the benefit concert, the entire audience notices her when she steps out on stage:

The crowd babble died quickly, punctuated by a few whistles; in a microskirt, suede boots and a full-sleeved blouse with a deeply scooped-out neckline, Beth was something to whistle at.

As the only other female character in the novel, Jenny also receives similar treatment but in her case it’s somewhat awkward:

For a twelve-year-old she was almost frighteningly grown-up, with her wide, candid eyes and air of total self-assurance. Her long dark hair hung straight down her back, and even in jeans and a boy’s shirt she was emphatically a girl. Every time he saw her these days, Bobby realized that it wouldn’t be too long before his little sister would become … well, his not-so-little sister.

I often wonder who decided which TV shows should get TV tie-in novels and/or comics. The network? The studio? In this case was it Bobby Sherman’s manager/publicity team? Why did it get so many tie-ins?

There’s an advertisement at the end of the book for other Curtis TV Titles, including tie-ins based on The Partridge Family, The Bugaloos, and Here Come the Brides.