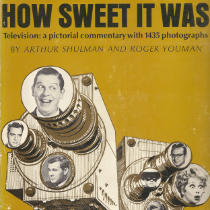 How Sweet It Was: Television: A Pictorial Commentary
By Arthur Shulman and Roger Youman
First Published in 1966
Published by Shorecrest, Inc.
450 Pages

I bought a copy of this hefty tome at a used bookstore last year but put off reviewing it until now. Why? Because I wasn’t sure how to a review a book containing pictures and captions and nothing else. When I review a TV tie-in novel, I can talk about the story and whether the characters on the page match the characters on TV. Non-fiction books are also easy to review: is information useful, accurate, easy to find?

It wasn’t until I took the time to flip through How Sweet It Was that I realized it wouldn’t be difficult to review. The authors, both staff members at TV Guide, decided to shoehorn all of television into twelve categories. While that may seem like a lot, it’s really not. A lot of their choices about where to place certain TV shows make very little sense. It’s almost frustrating to try and figure out their reasoning. Comedies/sitcoms get their own chapter but dramas (excluding Westerns) are lumped in with dramatic anthologies. Sports are an afterthought, given a few pages in the final chapter about news and documentaries.

Here’s an excerpt from the introduction, in which Shulman and Youman explain purpose of the book:

Although this book is intended to be a comprehensive review of television during the past twenty years […] it is not meant to be just a scholarly history. The programs and people represented here were chosen not because they were “good” or “popular” or “successful,” but because each contributed, in some large or small way, to the progress of television. Theirs may not necessarily have been a beneficial contribution, just as the progress of the medium has not necessarily been in the direction of higher quality. Individually many of these pictures mean little, except to a few people; but considered cumulatively and in relation to each other, they constitute a panorama of the television scene since the last forties.

For better or for worse, in sickness and in health, this is what television has been during the past twenty years.

It’s hard to believe Shulman and Youman actually felt every single program included in How Sweet It Was contributed to “the progress of television” and they made some decisions about which TV shows and TV personalities to highlight. 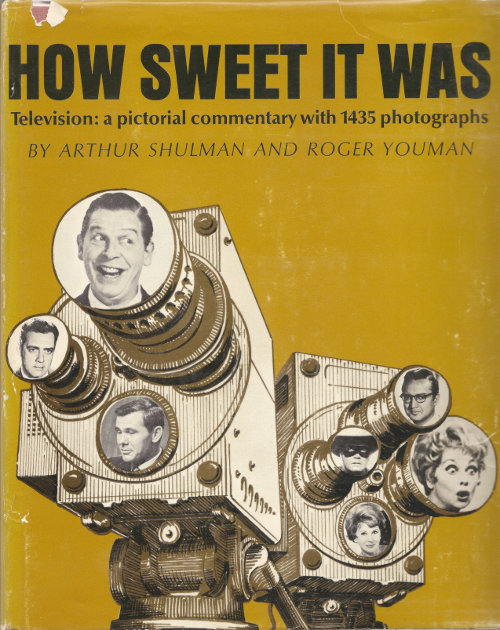 Front Cover of How Sweet It Was – Copyright © 1966 Shorecrest, Inc.

The first chapter is called “A Bunch of Bananas” and focuses on comedians like Milton Berle, Sid Caeser, Red Skelton, Jack Benny, and Bob Hope who were among the earliest TV stars. Most of the comedians who tried to translate their humor and their acts to TV failed, according to the authors. Some of these comedians are given two or three pages filled with pictures while others get just one. It seems obvious the authors decided to give the popular and successful names more coverage. That said, it’s not clear why they devote three pages to Bob Hope but just one to Jack Benny. Martha Raye gets a full page while Phil Silvers has to make do with a single picture.

“Personalities Plus” is the title of the second chapter, which focuses on TV hosts and hostesses. Again, the bigger personalities get more pictures and text. Ed Sullivan is given three pages; Arthur Godfrey, Arlene Francis, and Garry More get two pages; and Faye Emerson gets one page. Yet Robert Q. Lewis, “host, guest, and panelist on dozens of television offerings” is only given a picture. TV shows like Candid Camera, The Hollywood Palace, and Today are given their own entries.

“Custom-Made Comedy” is the fourth chapter, devoted to sitcoms. The authors make their feelings about the quality of sitcoms very clear:

Thus a contemporary situation comedy consists of artificial characters in artificial situations being egged on by artificial laughter. From time to time, letters appear in magazines and newspapers complaining that some viewers resent maniacal laughter unaccompanied by anything even remotely funny. These complaints probably represent a minority viewpoint; presumably the cast, the producer, and most of the audience welcome the faked hysteria on the grounds that it provides reassurance that what is being perpetrated is indeed comedy.

An occasional rose blooms in the wasteland. A show appears, people with recognizable humans who do or say recognizably funny thigs. They are evidence that all is not irretrievably lost. It is still possible to create a situation comedy inhabited by humans, or reasonable facsimiles thereof, who can evoke genuine laughter. Though the industry relies on assembly lines, the craftsman still survives.

There is no mention of Mary Kay and Johnny, the very first TV sitcom in the United States. The chapter opens with I Love Lucy. But plenty of short-lived and obscure sitcoms are included, like Joe and Mabel, Peck’s Bad Girl, Norby, The Soldiers, Hank, My Living Doll, Doc Corkle, Glynis, Those Whiting Girls, and Camp Runamuck. Also found in this chapter is It’s a Man’s World, which I don’t consider a situation comedy. 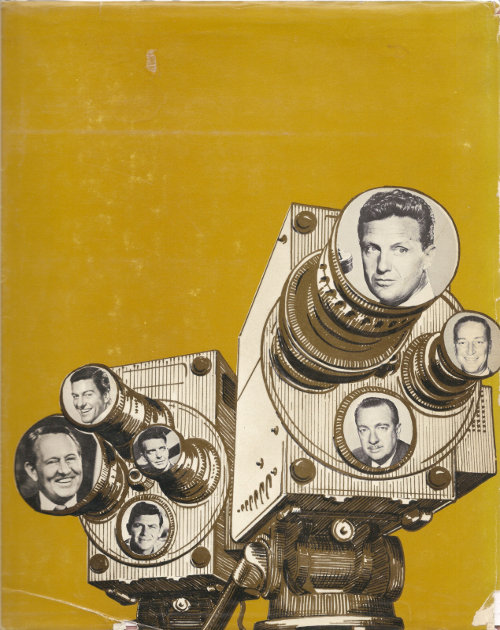 “A Thousand and One Opening Nights” is the title of the sixth chapter, which starts out examining dramatic anthologies from the Golden Age of Television like Philco-Goodyear Television Playhouse, Studio One, Kraft Television Theatre, Camera Three, The U.S. Steel Hour, Hallmark Hall of Fame, Omnibus, and Playhouse 90. Halfway through the chapter, the focus shifts to weekly dramas like Bus Stop, Perry Mason, Slattery’s People, Janet Dean, Registered Nurse, Medic, and Ben Casey. Also, Peyton Place.

To sum up, How Sweet It Was is an unusual book but if you can ignore the bizarre way the authors categorized certain TV shows, it’s not a bad one. The index helps; you can ignore the chapters entirely. There are 1,435 black-and-white photographs, many of them from short-lived and forgotten TV shows. Taken together, they do “constitute a panorama of the television scene since the late forties,” as the authors claim in their introduction.

This will be my last Bookshelf column for a while. Since 2008, I’ve reviewed more than 110 TV tie-in novels, comic books, magazines, and other books but I’ve finally run out. So, Bookshelf will be on hiatus until I can stockpile enough books to revive it.

7 Replies to “Bookshelf: How Sweet It Was”