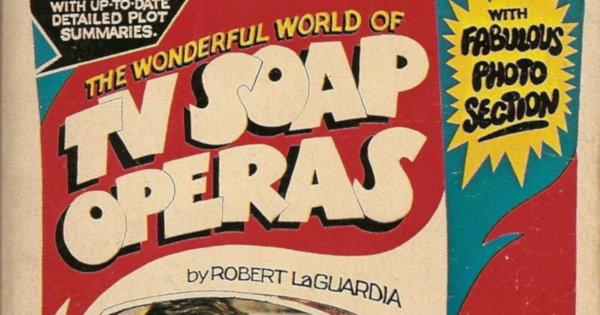 I have seen exactly one episode of one soap opera in my life. It was an episode of General Hospital that I watched when I was home sick from school back in the late 1990s or early 2000s ( I can’t remember exactly when). Understandably, I was completely lost but I seem to recall enjoying it. Other than that, I am not really a soap opera person.

Television Obscurities, with few exceptions, focuses on prime time programming, so you won’t find a lot of information about soap operas here. One such exception is my article on short-lived NBC soap opera Miss Susan starring Susan Peters, which ran from March to December 1951.

I purchased a lot of 50+ TV tie-ins on Ebay a number of years ago and included was a copy of Robert LaGuardia’s The Wonderful World of TV Soap Operas. Originally published in September 1974, it offers a history and examination of soap operas on television as well as in-depth plot histories for 15 individual soap operas, current as of July 1974. 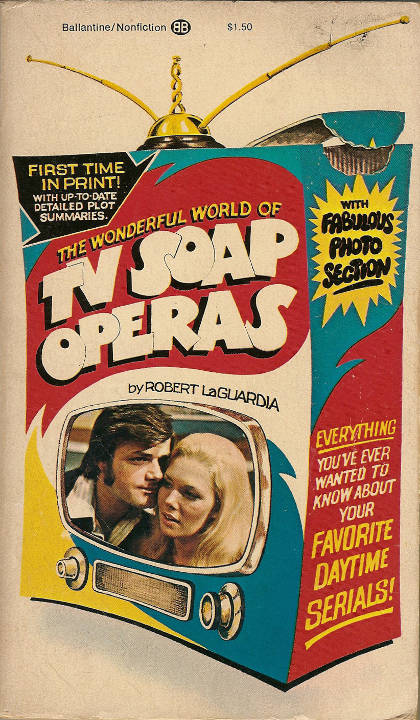 I only read select chapters from the book and not the entire thing. In the first chapter (titled “The Daytime Dramas of Yesterday and Today”) LaGuardia makes very clear his distaste for prime time programming — “ugly, crime-centered shows, or unfunny-funny sitcoms about spiritedly women who are about as real as Alice in Wonderland” — that he calls insipid and far less realistic than soap operas.

He also describes a shift in the critical and popular reaction to soap operas that occurred in 1968. Prior to that date, little regard was given to daytime serials. For some reason, however, in 1968 the tide changed and suddenly everyone was talking about soap operas in a positive light. Fan magazines launched. Budgets skyrocketed. Salaries soared. Actors and actresses were suddenly recognized wherever they went. No reason is given for why things changed in 1968.

The second chapter (“Live Tape!”) is a fascinating behind-the-scenes look at the production of a single episode of Another World. I skipped the third chapter, which discussed the long history of the Bauer family on The Guiding Light. The fourth chapter (“How Did the Serials Start?”) traces the history of soap operas on radio.

The fifth and sixth chapters were of the most interest to me.

In the fifth chapter (“Television Takes Over”), LaGuardia examines the early years of soap operas on television, which he states began with a one-off television version of the radio soap opera “Big Sister” in 1946, followed by a local Chicago soap opera called These Are Our Children, also in 1946, and a local New York City soap opera called A Woman to Remember in 1947. The first network soap opera, The First Hundred Years, debuted in 1950 on CBS and was followed in 1951 by two NBC soap operas: Miss Susan and Hawkins Falls.

(This history excludes DuMont’s Faraway Hill, often referred to as the first soap opera on television. It aired in prime time from October to December 1946).

The sixth chapter (“The War of the Daytime Networks”) covers the early 1960s when ABC and NBC attempted to topple CBS and its stable of popular soap operas. Introduced that year were General Hospital and The Doctors. Soon thereafter came Another World, Days of Our Lives and Dark Shadows.

Later chapters discuss reaction from viewers, famous mistakes made on soap operas, writing for soap operas and the future of soap operas. The last 130 pages are dedicated to plot summaries for soaps like All My Children, Another World, The Doctors, The Edge of the Night, How to Survive a Marriage and The Secret Storm.

As someone who doesn’t watch soap operas and doesn’t know all that much about them, I found the portions of The Wonderful World of TV Soap Operas that dealt with the history of the soap opera on television very interesting. I had no idea in 1960 CBS debuted a soap opera about astronauts called The Clear Horizon. I would love to know more about that show.

5 Replies to “Bookshelf: The Wonderful World of TV Soap Operas”