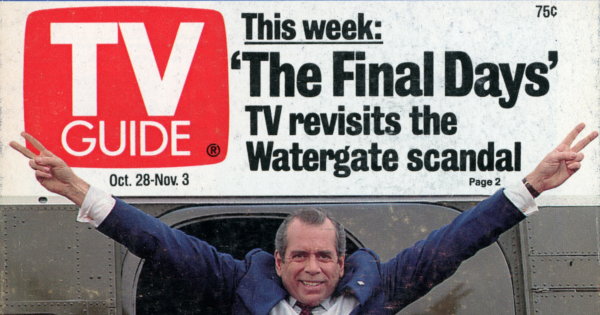 I’m too young to have lived through the Watergate years and the downfall of Richard Nixon and I haven’t seen ABC’s The Final Days, a made-for-TV movie based on the book of the same name by Bob Woodward and Carl Bernstein. “Students of history and voyeurs of all political persuasions will likely be caught in the movie’s sway,” declares Michael Leahy. “Just doing Nixon’s mannerisms has enabled me to see how uptight and knotted he must have been,” star Lane Smith explains.

Even though I’ve never seen Snoops, I read the article about Daphne Maxwell Reid because it’s about a short-lived TV show. [CBS only aired 13 episodes of Snoops during the 1989-1990 season, the last three during the summer of 1990.] She stars alongside Tim Reid, her real-life husband who is also an executive producer. “When it gets really bad,” Maxwell Reid explains, “I demand my hug break. And my producer always obliges.” CBS picked up the show without a pilot, giving Reid just eight weeks to prepare for filming. Maxwell Reid is happy to concentrate on her acting and let Reid take charge of the show, although she tries to help behind-the-scenes.

I also read the article about Richard Greico, star of one season wonder Booker (which, like Snoops, I’ve never seen). He insists his “tough-guy-with-a-deep soul image” is not an image. “I did this before it became chic,” he explains. “I get out here and everyone tries to be like this. I’ve been like this since I was 15.” Greico joined the cast of FOX’s 21 Jump Street the previous season and rumors spread quickly about tension with other cast members, particularly Johnny Deep. While Greico claims there were no problems, that he and Depp became good friends, 21 Jump Street supervising producer Eric Blakeney confirms there were issues–professional, not personal.

I skipped the interview with Carl Bernstein and Bob Woodward and the article about succeeding in Hollywood, plus the three one-page The Scoop profiles of Bobby Rivers, Raye “Zap” Hollitt, and Bebe Neuwirth.

Prices from the Video Cassette Report for movies on VHS: Leviathan ($89.95), Lost Angels ($89.98), Scandal ($89.99). Cheers ‘n’ Jeers praises Mark Harmon’s “growth as a television performer,” criticizes The Golden Girls for “a display of devious and shameful behavior” involving a free meal, laments the stereotypes on ABC’s Life Goes On, and applauds the writer’s of ABC’s thirtysomething “for their deft development of the character Nancy.”

Robert MacKenzie reviews The Joan Rivers Show (the daytime talk show). Rivers “puts her own spin” on the usual daytime topics like diets and pregnant teens. “She’s vulgar, she’s uninformed, her nerves are stretched almost as tight as her facial skin, and her voice, which sounds as though someone has gone over it with 80-grit sandpaper, isn’t exactly melodious. Yet she’s one of the most watchable talk-show hosts on the air. She’s as quickly moved as she is quick with a one-liner; when she says “God bless you” to a guest in a troubled situation, she seems to mean it.”

There are seven news reports this week. The first examines how the networks covered the 1989 Loma Prieta earthquake in California on October 17th. ABC was knocked off the air at 8:04PM ET. Dan Rather went on the air at 8:21PM ET with Dan Rather. Ted Koppel began ABC’s coverage at 8:54PM ET while NBC didn’t go on the air with news coverage until 9:34PM ET. Collectively, the networks may have lost as much as $10 million. ABC won the ratings race with an overnight Nielsen rating of 24.2 and a 32 share. NBC came in second with a 13.5/19 and CBS was third with a 12.6/18

Other reports: multiple made-for-TV movies and TV shows will explore date rape this season; Barbara Walters will present the first American TV interview with the Duchess of York on November 1st; CNN anchor Bernard Shaw has been diplomatic in his response to teaming up with Catherine Crier (a former judge) for a new hour-long show; John Goodman is feeling overworked; ABC finally broke NBC’s 86-week winning streak in the Nielsen ratings thanks to the first two games of the World Series and low ratings of several NBC shows; Theodore Bikel shares his opinion of Henry Kissinger, who he plays in ABC’s The Final Days.

Three of the nine letters respond to an article made-for-TV movie A Cry For Help: The Tracey Thurman Story published in the September 30th issue. Here are two:

I always knew Nancy Mckeon had talent, but it was limited to a sitcom and a TV-movie every now and then. Her performance as Tracey Thurman in “A Cry for Help” was remarkable.
G. Blaine H.
Houston

“A Cry for Help: The Tracey Thurman Story” offered still another case of child abuse by those involved in a television drama. While the adults involved in the making of this movie knew that the furious screaming matches and physical assaults were staged, the frightened, hysterically weeping infant cast as the child of Tracey Thurman did not. The movie should have been titled “A Cry for Help: The Story of a Child Actor.”
Martha W.
Lancaster, Pa.

Sunday, October 29th, 1989
7PM ABC (2) (6) (12) FREE SPIRIT (CC)–Comedy
Halloween: it’s Winnie’s least favorite day of the year, but it’s a big day for Jessie (Alyson Hannigan) because the most popular clique around is deciding whether she may join.

FOX (19) (28) (45) BOOKER–Crime Drama; 60 min.
Alicia (Marcia Strassman) puts her money on Booker (Richard Grieco) to find her ex-husband, a gambler who’s taken their daughter along for the ride.

8PM NBC (4) (5) (22) SISTER KATE (CC)–Comedy
Hilary (Penina Segall) does a masterly job of keeping her wheelchair a secret from a boy she likes; and Neville (Joel Robinson) gives Kate (Stephanie Beacham) the silent treatment after she upbraids him for his language.

Monday, October 30th, 1989
8:30PM CBS (7) (9) (10) FAMOUS TEDDY Z (CC)–Comedy
A repeat of the opener recalls how Teddy (Jon Cryer) got a permanent job at the talent agency after an obnoxious star tries to take advantage of his good nature. (Repeat)
[Another episode airs in an hour.]

9PM FOX (19) (28) (45) ALIEN NATION (CC)–Drama; 60 min.
As Emily (Lauren Woodland) prepares for her first Halloween, Uncle Moodri (James Greene) tells her of a Newcomer legend, which parallels a series of Newcomer mutilations that George (Eric Pierpoint) is working on.

9:30PM CBS (7) (9) (10) FAMOUS TEDDY Z (CC)–Comedy
It’s some enchanted evening as Teddy (Jon Cryer) meets a stranger across a crowded room, a beautiful–and newly separated–movie star who takes him to her home, where they really cook.

Tuesday, October 31st, 1989
9PM CBS (7) (9) (10) WOLF (CC)–Crime Drama; 60 min.
Tony (Jack Scalia) puts aside his friendship with his old high-school coach to investigate the death of a track star and suspect steroid use at the school. (Repeat)

9:30 ABC (2) (6) (12) CHICKEN SOUP (CC)–Comedy
On Halloween night, Bea (Rita Karin) takes some advice from her friends–and Phil Donahue–and decides to move out, but Jackie (Jackie Mason) thinks it’s more of a trick than a treat.

10PM CBS (7) (9) (10) ISLAND SON (CC)–Drama; 60 min.
Tutu (Kwan Hi Lim) is charged with practicing medicine without a license after conducting a healing ceremony for a hospitalized friend. Meanwhile, Caitlin (Carol Huston) grows uneasy over the attentions of a secret admirer.

Wednesday, November 1st, 1989
9:30PM NBC (4) (5) (22) NUTT HOUSE (CC)–Comedy
A scheming PR agent (Beverly Leech) teams with Sally (Molly Hagan) to give the hotel a new look, then plots to take Charles (Brian McNamara) away from Sally after one look at him.

After months of waiting, TV Guide finally publishes not one but two articles about new shows that turned out to be short-lived (Snoops on CBS and Booker on FOX). True, they were profiles of a cast member but a few behind-the-scenes tidbits were included. I believe there were a few pre-emptions this week to make room for programming disruptions caused by live coverage of the 989 Loma Prieta earthquake.

That’s it for this issue. Check back next week for my review of the November 4th, 1989 issue of TV Guide. As always, hit the comments with any thoughts or reactions.