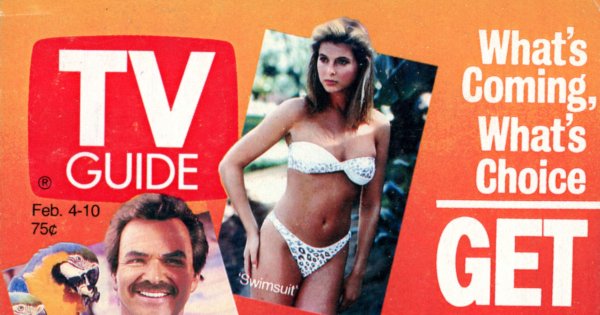 On the Cover: Photo montage of upcoming miniseries and specials.

This week’s cover article isn’t much of an article. It’s a list of all the February sweeps programming on the networks, including miniseries like Lonesome Dove (CBS) and Dead of Night (NBC), TV-movies like The Hijacking of the Achille Lauro (NBC) and Bridesmaids (CBS), plus special episodes of regular series, specials, and sports.

The Columbo article co-written by Peter Falk includes a sidebar about the famous sleuth’s famous car, a beat-up 1960 Peugeot 403. Sold after the show wrapped production in 1978, it ended up in the hands of a couple who purchase it from an add in Old Cars Weekly. They kindly lent the car to Universal Studios for free.

Helen Newton’s article about NBC’s made-for-TV movie The Sex Tapes ends with the following quote from executive producer Robert Sertner: “Maybe we’re slimebuckets. But if the ratings weren’t high, these projects wouldn’t get made.”

I wanted to be a paleontologist when I was a kid, so of course I read the article about “The New Dinosaurs,” a segment included in the February 8th installment of the PBS series Discover: The World of Science. I skipped the articles about Lonesome Dove and Davy Crockett, plus the brief profile of actress Park Overall.

Merrill Panitt reviews Murphy Brown, lamenting how “CBS simply has no good place on its schedule where a new sitcom can follow a hit series and inherit a big audience.” If CBS had such a time slot, Murphy Brown would be a ratings leader. Why? Because “the show is put together like a fine watch by creators-producers Diane English and Joel Shukovsky.” Panitt praises star Candice Bergan, the supporting cast, and the scripts. Hopefully, he concludes, “before too long this intelligent comedy will be earning the audience it deserves.”

There are two In the News reports this week. The first discusses a pair of television bills in front of the 101st Congress: one restoring the Fairness Doctrine and the other limiting advertising on children’s programs. The second report examines the controversy surrounding Channel One, a 12-minute news program to be tested in several school districts in March. Why is it controversial? Because it includes two minutes of commercials in each program.

On the Grapevine contains four reports this week. Two are about guest stars. Dick Van Patten will appear in an upcoming episode of Growing Pains as the bigoted manager of a convenience store where Mike Seaver (Kirk Cameron) gets a job. Cleaven Little will show up in the February 9th episode of Dear John.

According to The Ratings Race, both Moonlighting (ABC) and Dallas (CBS) are no longer “impregnable in their time slots.” Both shows have fallen to second place in recent weeks. Also, Super Bowl XXIII (NBC, January 22nd) earned a massive 43.5/68 Nielsen rating/share, placing it 30th on the list of highest-rated programs of all time. Finally, the January 18th episode of The Wonder Years tied the show’s season best (in its regular time slot) with a 16.5/25 rating/share.

Four of the eight letters respond to an article in the January 7th, 1989 issue about the TV networks pushing boundaries. Here are two of them:

In Howard Polskin’s article regarding the broadcast networks’ relaxed standards, producer Steven Bochco is quoted as saying that NBC programming executives are hoping that the producers “won’t behave like children run amok.” But that has already happened. L.A. Law has become Dr. Ruth in a $500 suit. The networks had better regulate themselves, before the audience demands that Congress do it for them [“TV’s Getting Sexier … How Far Will It Go?” Jan. 7].
Roger K.
Duenweg, Mo.

Relaxed standards? Give me a break! The networks excise anything that would offend a backwater fundamentalist. Their goofy euphemisms are enough to make a lexicographer weep. “Edited for television” is their dastardly battle cry. Arched backs? Racy garments? Silhouette shots? Either Howard Polskin is pulling our legs–or he’s just escaped from a monastery.
Jon R.
San Carlos, Cal.

10:00PM ABC (24) (2) (6) (7D) (21) MURPHY’S LAW (CC)–Crime Drama; 60 min.
A grief-crazed claimant out to kill Wes (Josh Mostel) holds Murphy’s co-workers at gunpoint in the insurance office, while Murph (George Segal) copes with a visitor who’s not what he purports to be: a fellow AA member lurching off the wagon. Kimi: Maggie Han.

The most interesting thing about this issue is the incredible number of advertisements it contains. And not just for network prime-time programming. There are full-page ads for daytime soap operas Another World (NBC) and One Life to Live (ABC) as well as syndicated, cable, and local programming. Why all the ads? The start of February sweeps, I assume.

That’s it for this issue. Check back next week for my review of the February 11th, 1989 issue of TV Guide. As always, hit the comments with any thoughts or reactions.