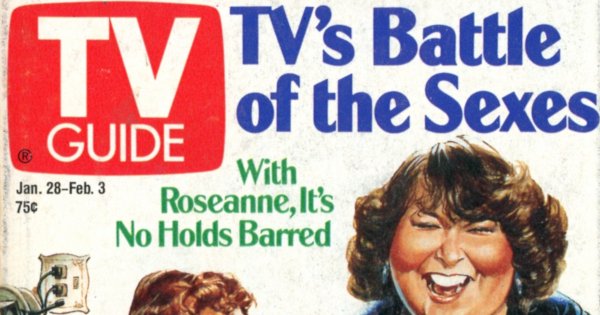 On the Cover: John Goodman and Roseanne Barr, by Richard Stark

The cover article is a profile of Roseanne Barr, not the behind-the-scenes look at her ABC sitcom Roseanne I was expecting. The brief article about Don Johnson and Melanie Griffith rekindling their romance is almost shockingly pointless. The profile of Gary Cole is slightly more interesting.

The long article about casting a role on Guiding Light ends exactly the way you’d expect. Although nearly everyone involved in casting the role thought UCLA theater major Suzy Cote was the right choice, they all worried she was hiding something under the long, shapeless brown dress she wore to her auditions. She was asked to send pictures of herself in a bathing suit. She did. The pictures revealed she had a “great figure.” She got the part.

My favorite article is Neil Hickey’s one-page explanation of how Soviet citizens in Tallinn, the capital of Estonia, videotape TV shows broadcast on Finnish television from nearby Helsinki (including many shows produced in the United States like Dallas, Hill Street Blues, and The Cosby Show) and sell them illegally throughout the Soviet Union. According to Hickey, Tallinn is “the only place in the Soviet Union where Western television shows are routinely available to anybody with a TV set and an antenna.” It is therefore the center of an enormous bootleg operation:

For this exercise in offbeat capitalism, budding entrepreneurs bearing VCRs travel to Tallinn from many parts of the Soviet Union, check into a hotel or bunk in with an accomplice, and then spend days or weeks videotaping the output of Finnish television. Returning to their home districts, they then duplicate the tapes and sell them on the black market, or exhibit them for profit in makeshift video parlors where the public views them for a fee.

Prices from the Video Cassette Report for movies on VHS: Bull Durham ($89.98), The Dead Pool ($89.95), Die Hard ($89.98), The Nest ($79.95), The Presdidio ($89.95). Cheers ‘n’ Jeers criticizes pay cable for the long delays between the start time for boxing matches and the actual start of the fight, praises Brian Starcher of As the World Turns for his portrayal of the first ongoing gay male character, applauds President Bush for refusing to answer shouted questions from the press, and commends Murphy Brown as “one of the season’s few comedic bright spots.”

Merrill Panitt reviews the PBS series Ethics in America, comparing it favorably to an earlier PBS series called The Constitution: That Delicate Balance. Former CBS news chief Fred Friendly created both shows. Ethics in America features a panel of experts tasked by a moderator with answering thorny ethical questions. “When so much much is being written and said about the decline in ethical behavior in our country,” says Panitt, “Ethics in America is a timely effort to allay confusion over the difference between what we have a right to do and what is the right thing to do.”

“Lively, intelligent, surprisingly witty and down-to-earth,” Panitt continues, “Ethics in America is fun to watch. It proves once again that when abstract subjects are presented in a palatable, entertaining form, television does indeed have the ability to make us think–and enjoy it.”

[I had never heard of Ethics in America before flipping through this issue of TV Guide. Ten episodes aired during 1989. All ten are available for viewing online through the Annenberg Learner website.]

This special three-and-a-half page Midseason Review showcases the best and worst of the 1988-1989 TV season so far. In the Series category, Roseanne and Murphy Brown are the Rookies of the Year. Tattinger’s, on the other hand, is the Biggest Disappointment. Other entries include Saddest Sight (Dick Van Dyke in The Van Dyke Show and Mary Tyler Moore in Annie McGuire); Most Stylish First Episode (Midnight Caller); Most Consistently Funny Sitcom (Designing Women); and Most Compelling Storyline (Elliot and Nancy’s breakup on thirtysomething).

Finally, in the Sports and Specials category, NBC’s Olympics coverage is Most Over-Seouled Spectacle, various specials marking the 25th anniversary of President Kennedy’s assassination are the Saddest Trip Back Through Time, and “The Human Rights Now! Tour” on HBO is the Most Overhyped Musical Special.

From my perspective, the special Midseason Review section in place of Update and Letters is a disappointment. I’d much rather read about news and ratings from mid-season 1989 than TV Guide‘s mostly silly take on the first half of the 1988-1989 season. Two more mid-season replacements debuted this week: Hawk (ABC) and Unsub (NBC). I had heard of both prior to flipping through this issue.

That’s it for this issue. Check back next week for my review of the February 4th, 1989 issue of TV Guide. As always, hit the comments with any thoughts and reactions.