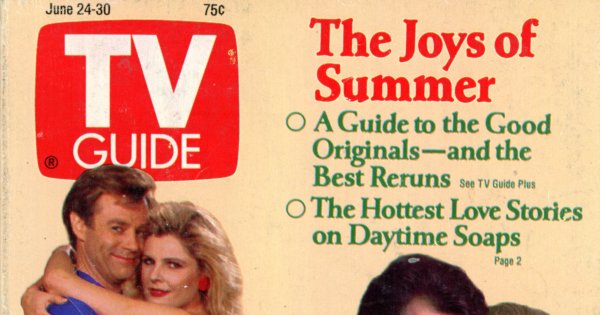 On the Cover (left to right): Tristan Rogers and Edie Lehmann, by Tony Costa; James DePaiva and Jessica Tuck, by Lucille Khornak

I had a tough time finding anything of interest in this week’s issue. I read the article about TV news and the environment and the article about Dinah Manoff of Empty Nest. “Everyone wants to know about the damn dog,” she complains. “What is the dog, John Travolta? Should I say I get nervous when I’m around him, he’s so attractive?” Having never seen Empty Nest, I don’t know anything about the dog in question.

I skipped the articles about love stories on soap operas and tennis, plus the one-page profile of Nancy Stafford.

A four-page “summer survivor’s guide” runs down network and cable programming for the summer: weekly series (including scripted shows on NBC and CBS), miniseries, TV-movies, specials, and sports.

Three of the seven letters respond to an article about women worth watching on television published in the the May 27 issue. Here are two:

Jane O’Reilly is right to single out Murphy Brown, Kate & Allie and China Beach as shows featuring intelligent and admirable women worth watching. Designing Women, however, is a misnomer. It should be called Whining Women. While her goal might be to avoid stereotyping, Linda Bloodworth-Thomason’s creation of Julia Sugarbaker fits every feminist cliche in the book: she’s loudmouthed, shrill, self-righteous and humorless.
Roger P.
Manchester, N.H.

O’Reilly relinquished all legitimacy as a critic of female TV characters with her comment that Lucy Ricardo was dumb. I’d like to see Cagney and Lacy mastermind the theft of John Wayne’s footprints from Grauman’s Chinese Theater!
F. S.
Palm Springs, Cal.

Wednesday, June 28th, 1989
8PM CBS (11) (2D) (7) (10) (15) HARD TIME ON PLANET EARTH (CC)–Adventure; 60 min.
A reporter tries to help Jesse (Martin Kove) find the power-depleted Control after he suffers a misadventure at Disneyland and is taken home by a child, whose father thinks Control may be a national-security threat. (Repeat).

The best part of this issue was the “summer survivor’s guide” in the program section. Now I know what new and returning scripted network shows to be on the look for as the summer of 1989 continues.

That’s it for this issue. Check back next week for my review of the July 1st, 1989 issue of TV Guide. As always, hit the comments with any thoughts or reactions.