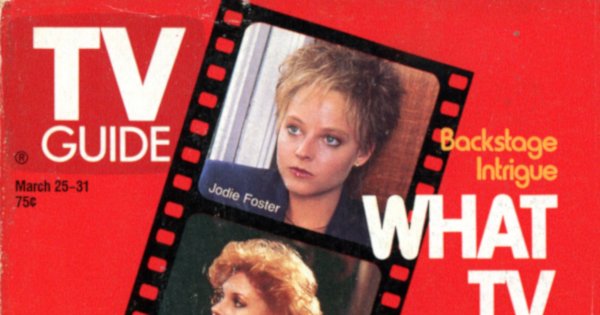 On the Cover (top to bottom): Jodie Foster, by Photofest; Melanie Griffith, by Andy Schwartz/Photofest; Gene Hackman, by David Appleby; and Dustin Hoffman, by Stephen Vaughan.

Harry Stein’s article about TV’s ideal men is the best of a weak batch of articles this week, mostly because it references television shows dating back to the 1950s. Yet like so many TV Guide articles, it’s meaningless fluff. It starts off with a look at TV heroes of the 1950s and early 1960s like Matt Dillon and Joe Friday. Next come the less macho heroes of the late 1960s like Napoleon Solo and Maxwell Smart. The 1970s brought in sensitive men like Alan Alda, “who probably would’ve had trouble getting dates back on 77 Sunset Strip.” Most men, Stein contends, aren’t that emotionally open.

In short, we in this culture find ourselves these days pretty confused about what makes for an appealing man. In what other era could Spuds MacKenzie (who’s not even actually male, for heaven’s sake) find himself a sex symbol? Or the Beast? “Vincent is exactly what a man should be,” as one woman I know recently observed of CBS’s hairy hero, “–kind, sensitive, strong. The only trouble is how to explain to your mother that he lives in the sewer.”

He then runs through a list of male characters on current TV shows, ranging from Hunter and MacGyver to Sam Malone (Cheers) and David Addison Moonlighting) to Michael Steadman (thirtysomething) and Michael Kuzak (L.A. Law). The “new male ideal” may be Stuart Markowitz of L.A. Law, Stein concludes. “In brief, he is a man at once every bit as worthy of respect as the heroes of old and far more accessible-the guy next door as role model.”

The article about the Oscars includes some interesting behind-the-scenes tales from previous broadcasts. The article about Drew Barrymore is depressing but was probably even more depressing to readers in 1989 who didn’t know how her life would turn out. I didn’t read the article about NBA players or the excerpt from Why Me? The Sammy Davis Jr. Story.

Merrill Panitt reviews Mission: Impossible, the show with “the least believable plots and dialogue on television.” He spends the bulk of the review explaining the concept, characters, and plots. “Don’t even try to believe Mission: Impossible,” Pannitt concludes. “That would take the fun out of the fantastic things Jim and his people do–with straight faces. It’s all pretty mechanical and the baddies are played so broadly that they become caricatures, but who cares? This is pure escapism.”

There are two In the News reports this week. The first is a long preview of the upcoming Academy Awards, with the expected predictions. The second is about Today weatherman Willard Scott, who expects to be fired because of his feud with Bryant Gumbel.

On the Grapevine contains four reports this week. Jesse Jackson will guest star in an upcoming episode of A Different World, Malcolm-Jamal Warner will guest star in the season finale of Tour of Duty, Barbara Walters insists she has trouble getting people to agree to an interview, and Joe Don Baker will temporarily replace Carroll O’Connor on In the Heat of the Night while O’Connor recovers from surgery.

According to The Ratings Race, changes to ABC’s Tuesday lineup, which included shelving Moonlighting, shifting The Wonder Years from Wednesday, and introducing new sitcom called Anything but Love, worked wonders for the network. Also, the national debut of Cops earned a 7.5/13 rating/share, the best result ever for a Saturday program on FOX.

One of the seven letters responds to poor ratings for China Beach compared to Nightingales, as reported in March 4th issue:

I find it appalling, though not surprising, that ratings are higher for the NBC series Nightingales than they are for ABC’s China Beach [“The Ratings Race,” March 4]. It is unfortunate that the public would rather see nurses portrayed as sexy, unthinking bimbos than as the caring professionals that you see on China Beach. If you’ve ever been in the hospital, you’ll know which is the more accurate portrayal!
Karen A.
Oakland, Cal.

10PM CBS (11) (2D) (7) (10) (15) WEST 57TH (CC)–Newsmagazine; 60 min.
Scheduled: An interview with Oscar nominee Edward James Olmos (“Stand and Deliver”); a report on a crime-ridden public-housing development in Chicago; a segment on “phone confession” lines; and a feature on “the oddities of the Oscars.”

ABC (24) (2) (6) (7D) (21) MEN (CC)–Drama; 60 min.
Debut: A series about four Baltimore men, bound by a weekly poker game and a friendship formed in high school: surgeon Steven Ratajkowski (Ted Wass), criminal lawyer Charlie Hazard (Ving Rhames), reporter Paul Armas (Saul Rubinek) and cop Danny McDaniel (Tom O’Brien). In the opener, the pals are devastated by the death of one of the friend [sic] who kept them together through the years. Margaret Hazard: Candy Ann Brown.

Wednesday, March 29th, 1989
8PM CBS (11) (2D) (7) (10) (15) HARD TIME ON PLANET EARTH (CC)–Adventure; 60 min.
Another alien takes the form of a beautiful woman in its search for Jesse (Martin Kove), contributing to Jesse’s confusion about the relationships between males and females.

After a solid batch of articles in the previous issue, we’re back to normal this week. None of the articles are particularly interesting. At least the ad for the series premiere of Quantum Leap is nice to look at.

That’s it for this issue. Check back next week for my review of the April 1st, 1989 issue of TV Guide. As always, hit the comments with any thoughts or reactions.