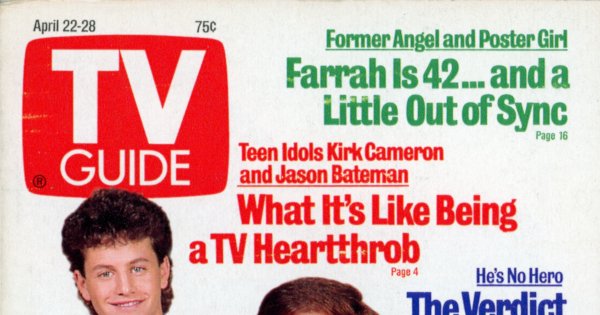 On the Cover: Kirk Cameron and Jason Bateman, by Tony Costa

The cover article seems quaint. Long before social media and messaging apps, young girls fell in love with the teenage actors they watched on TV and read about in fan magazines. According to UCLA psychologist Dr. Irene Goldenberg, “These young girls aren’t ready for sex on a personal or individual basis. They’re exposed to it on television and in the movies, and they want to deal with it without risk… It’s a fantasy way of having a boyfriend.”

Speaking of sex, the article about Farrah Fawcett insists she’s happy to be 42. “A part of Farah Fawcett has been looking forward to this day,” Michael Leahy writes, “when things as ephemeral as youth and a sex kitten’s feral beauty could not longer be regarded by Hollywood’s mavens as her stock in trade.” She’s sick of being asked to play characters in their youth and later in life. She wants to portray characters closer to her actual age.

The article about Mr. T mentions his syndicated TV series T and T just once. His gold chains come up several times.

Judge Abner J. Mikva’s thoughts on The People’s Court are fascinating. He’s not a fan:

I endured about a dozen shows. Most were even more boring than real-life trials of fender benders, landlord-tenant arguments and workplace disputes. So I suppose that The People’s Court could claim some points for realism.

But it is precisely this veneer of “realism” that troubles me most about the show. The People’s Court offers itself up as a slice of real law. It has real people with real controversies. It has a real judge–or at least a real former judge, sporting the real trappings of a judge: a high bench and a black robe.

But that’s where the similarities end. As soon as Judge Wapner brings “law” into his courtroom, we are transported to legal never-never land. Judge Wapner prepares his viewers for a knowledgeable discourse on American law about as much as the doctors on M*A*S*H prepared their audience to perform surgery.

The “article” by Annette Funicello, timed to coincide with the debut of The All-New Mickey Mouse Club on The Disney Channel, runs for just two brief paragraphs.

I skipped the articles about Margaret Bourke-White (a reprint of an article from 1977), Simon Wiesenthal, and Kristian Alfonso.

Lawrence Eisenberg’s Grapevine includes tidbits about how much Linda Evans loves cooking, Carroll O’Connor’s showdown with Brandon Tartikoff and MGM/UA-TV president David Gerber after the first season of In the Heat of the Night, Heather Locklear’s reaction to fans asking her to take a picture of them with her husband Tommy Lee, and more. Alan Carter shares stories about Boomer Esiason, Judith Borne, and Ted Danson in Soaps. Mel Durslag’s Sports View tackles Ralph Miller’s retirement and how ESPN anchors Chris Berman and Tom Jackson are preparing for the NFL draft.

Prices from the Video Cassette Report for movies on VHS: Child’s Play ($89.95), The Incredible Hulk Returns ($59.95), Crossing Delancey ($89.95), Memories of Me ($89.98), Running on Empty ($89.95), Tucker (Not Available). Cheers ‘n’ Jeers criticizes Brent Musburger for his basketball coverage on CBS, praises NBC’s Generations “for finally introducing a black core family to daytime TV,” laments the “mixed messages” sent out by Mattel’s Animal Lovin’ Barbie commercials, and applauds Richard Lewis for moving from stand-up to sitcom on Anything But Love.

Merrill Panitt spends much of his review of ABC’s A Man Called Hawk explaining the premise. He does, eventually, give his opinion about the show, praising the camera work and Avery Brooks for his “colorful interpretation” of the lead character. But he also criticizes the scripts:

As for the stories, we’ve been fed so many crime shows by the networks that nothing the writers come up with seems original anymore. Despite their efforts to balance Hawk’s propensity for violence by showing his more thoughtful and charitable side, he remains pretty much one-dimensional. While we may enjoy the way Brooks portrays Hawk, and watching the character swagger, search and shoot, if you’ve seen one episode, you’ve seen ’em all.

Two of the six letters respond to an article about TV’s “ideal man” published in the March 25th issue of TV Guide. Here they are:

Comparing MacGyver to the “Shoot first, question later” men like the Equalizer, Hunter and Wiseguy is a bit like comparing Benji to a pit bull. (Or Sir Alec Guinness to Pee-Wee Herman.) For the record, the character hates guns–a fact that makes the show so enjoyable to watch [“TV’s Ideal Men? The Good Guys, the Bad Guys,” March 25].
Patrice M.
Huntington Beach, Cal.

Sensitive and caring, MacGyver loathes violence … and he eats tofu. He’s just like my husband (except MacGyver is handy at fixing things)!
Barbara G.
Hamden, Conn

There are four In the News reports this week. One is a lengthy behind-the-scenes breakdown of the Cheers season finale that wasn’t, after the writers decided not to have Sam Malone marry Rebecca Howe’s sister. Also, Tom Brokaw is angry about leaks in the NBC News Division and Disney plans to release Bambi on video.

On the Grapevine contains four reports this week. Jean Smart is pregnant, so her character on Designing Women will get pregnant, too. And David Hasselhoff almost turned down the starring role in an upcoming NBC pilot called “Baywatch: Panic at Malibu Pier.”

According to The Ratings Race, prime time soaps Dallas, Falcon Crest, and Knots Landing were among the “most heavily recorded” TV shows during the first quarter of 1989, along with Roseanne, The Wonder Years, thirtysomething, and L.A. Law. The April 8th episode of ABC’s Men earned a 4.1/8 Nielsen rating/share, making it the lowest-rated network show that week.

10PM CBS (11) (2D) (7) (10) (15) WEST 57TH (CC)–Newsmagazine; 60 min.
Scheduled: A report on efforts in several Florida counties to have women who give birth to crack-addicted babies prosecuted for child abuse; a follow-up to a November 1988 segment on problems between some United Airlines pilots who participated in a 1985 strike and colleagues who crossed the picket lines.

ABC (24) (2) (6) (7D) (21) MEN (CC); 60 min.
Poker pal Harvey has been playing his personal life close to the vest, and his subsequent disappearance has the men closely examining their relationships with the women in their lives.

9PM ABC (24) (2) (6) (7D) (21) GIDEON OLIVER (CC)–Crime Drama
In the Caribbean, Oliver (Louis Gossett Jr.) champions a naive youth accused of murder after being swept into a caldron of racism, drugs, money and power.

I enjoyed Judge Abner J. Mikva’s article criticizing The People’s Court and hope to see more articles like it in future issues.

That’s it for this issue. Check back next week for my review of the April 29th, 1989 issue of TV Guide. As always, hit the comments with any thoughts or reactions.